I like the look of the hammered look on some of my bar stock knives, but my shoulder doesn’t. Any ideas that could get that look with the least amount of work? I have using a ball peen hammer. a small power tool or a using some other physics I don’t know about?

If you search Christ Centered Ironworks on YouTube I remember seeing that guy use what amounts to an air chisel to do something on hot steel. Not sure if he was texturing or what but its a place to start. You could always build a treadle hammer but that seems like a large build for just texture work. Do you have a way to heat the steel up to forging temps? If so, I would go to Blacksmithdepot.com and look at their texture swages.

Yup, that's what I was going to say. Mount a pneumatic chisel/hammer over a makeshift anvil, and you could get right texture-y with it. Reshape a couple punches to the size of dimple you wanna make.

Get a Needle Scaler from HF.

I use a pneumatic Zip Gun with the inlet pressure reduced to around 40-60 PSI. This tool will beat the holly hell out of a chunk of metal. Controlling inlet air pressure is the trick to making the proper texture. 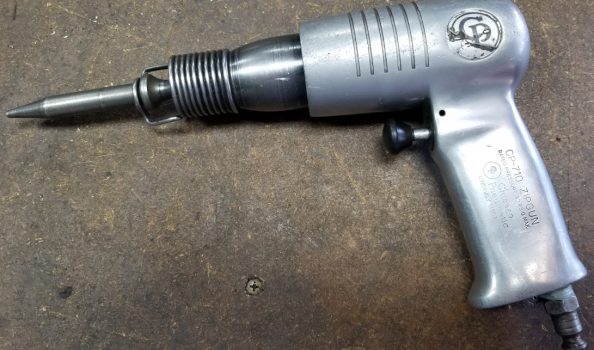 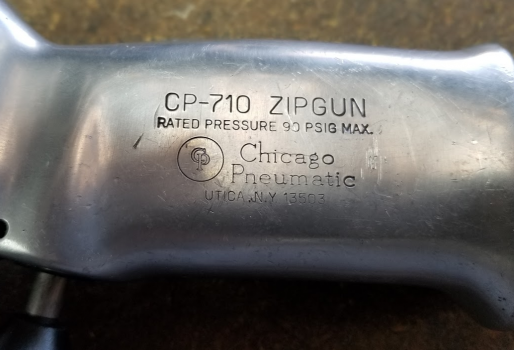 The tip is ground to around 1/8" diameter. Different tip diameters / shapes provide variations in the texture. 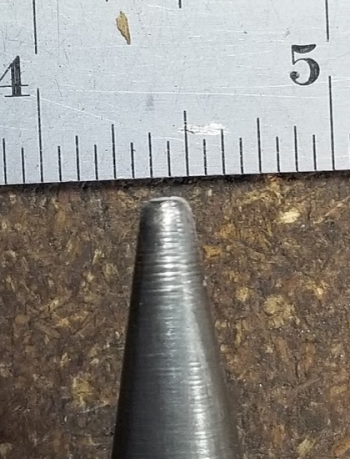 Trying to pound texture into a blank on a bench is difficult since the knife jumps all over. So I scabbed together a cheesy holder for various size blanks and clamp it to my metal base.

This is an example of the results 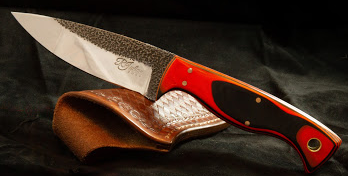 While the final texturing is appealing, there some things to consider. First, pounding steel in a cold condition distresses the surface and work hardens it. To relieve that stress it's probably a good idea to normalize the blade before HT. But, since the stresses are on the opposite side of the blade edge, I haven't found this to be a problem. I would definitely normalize a long blade.
This surfacing technique will also result in lateral distortion of the blade if the amount of pounded / upset metal is not equal on both sides. That is an issue that needs to be fixed either by uniform pounding on both sides or during the tempering process. Again, I've not found this to be a problem.
I've used this Zip Gun for several decades for all kinds of projects. It's a workhorse, originally intended for cutting / removing sheet metal, and exhaust pipes. The cutting tip makes short work of old rusty exhaust pipes.
You must log in or register to reply here.
Share:
Facebook Twitter Reddit Pinterest Tumblr WhatsApp Email Share Link
Top