No pics yet but I got Mark's knife. Just as awesome as the photos hinted at. This thing's a beast but without feeling over sized or clumsy. The handle is very nicely contoured for my hands (rare actually) and got sandblasted with the rest of the knife so it's got a nice smooth but non reflective finish. He describes it as a fusion of traditional tantos, western tantos and western fighters and I have to agree. The handle is western fighterish, and while there's no upper guard the blade swells upward nicely for your thumb if you want that kind of grip for utility work. The blade actually has a very slight recurve to it, mostly in the first inch or two from the guard, but a slight curve all the way out to where it curves up to the tanto tip. This part is a blend of traditional, western and what I assume is his own touch. It is a smooth curve rather than straight like a western tanto, but the very tip is actually NOT pointy, it kind of hints at exposing an edge to the spine side of the blade. I can see this holding up VERY well in piercing use in tough materials or if abused as an improvised pry bar. The actual bevels on the main blade never quite meet the spine even at the tip and stop about 3/4 of an inch shy of the tip. He beveled that independently from either the full thickness of the bar or close enough I'd have to measure. Talk about a strong design... To enhance piercing and visual appeal he's put short bevels down the spine all the way to the tip.

You can see all that in the photos on page two, but it's hard to tell what's an optical illusion or lighting and what's really there. The sheath is snug and just as pretty as in the pics. I'm definitely going to make a utility sheath for this from kydex. The sheath is well made and tough, not floppy or light leather, but I plan to mount this knife on my emergency gear and it'll get banged around a bit, no need for the leather to be abused. I'll save that for when I wear it on my belt hiking or camping.

Needless to say, I'm thrilled with it. This knife has nearly every element of my ideal heavy duty field knife and since two of the things I like are mutually exclusive... Hard to have both a mostly straight and short (height wise) blade AND a thin light weight blade with a gentle curve most of its length.
M

Wow, Remy.. that's enough to make a guy blush! I just turned on the PC to check the tracking number, but stopped in here first. I'm glad the knife made it safely, but far more excited about it finding a good home. As I'm sure you know, there's nothing more satisfying than having your work be well received by it's new caretaker. From the time I put pen to paper all the way to shipping it out, I thought that knife was a gamble. Not it's cutting ability or useability, but rather designing an oddball of sorts, and then sending it to an essentially random person. Truth be told, I made that knife for myself... not to keep, but more to see how it would turn out. I'm thrilled that you like it as much as I do!

DonL,
Im really happy you like the knife, and i really did blush reading your comments, thank you.
I got bit by some really thin hollow ground ATS-34 that sent me in for tendon repair.......carefull with that O-1:34:
This KITH was awesome i cant wait to recieve my AW Stovall.
Greg:s12201:
G

I picked up Paul Ausbrooks' knife this morning from the post office. I am honored to have received such a well made knife and sheath. The fit and finish of the knife is top notch! The leatherwork on the sheath is superb as well. This knife is going to have a very long and useful life in my hands. Thanks again Paul, your work is outstanding!
Last edited: Jul 20, 2012

Got my knife from s2f late on Wednesday. Working on four knives that are due this weekend so I couldn't post yesterday. This is a well made knife for only his 8th one. The knife is solid and should take a beating. This is going to be a user for me, as it's already on my belt and from there it will be in my pack. I'm very happy to find out the blade is 1/8" O1 with micarta handle and toxic green & orange liners. After a few licks this thing is shaving sharp. 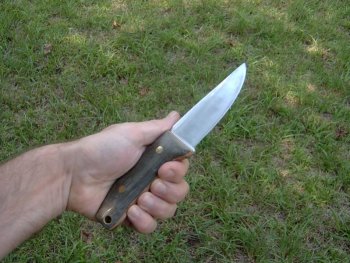 I love these KITH's!!!!! Thanks s2f for the knife. It was a pleasure talking to you yesterday. Thanks Sean for all the work you put into this. So many fine entries. Can"t wait for the next one.
C

I received my knife yesterday made by Dan Pierson, and I couldn't be happier. This is the first custom I have had, and put any other kitchen knife I have used to shame. This thing cuts like a dream, I have had to think of meals where I need to cut something just to use this knife. it looks even better than it did in the pictures.
This turned out to be a great experience and I can't wait until the next KITH.
-Cameron

Grizzly Craig you are welcome and thank you! I'm glad it found a good home and you will use it- The RC came out about 62 so should hold a good edge.

I got my Knife from Remy today. This is a very clean little knife. I am really pleased with it. The kydex sheath is also very nice. I will post pictures soon.

Just unwrapped my AW Stovall, and i like it! Ill post some pics tomorrow very nice feel in the hand, and wicked sharp!!
G

Anyone else have updates?

I received my knife from Cameron and and i shipped mine to Brad on Thursday. So be looking out for it Brad and thanks to Cameron for getting his awesome knife out to me much quicker than i got mine out.

Received! Thanks, Grizz its a marvelous little knife and the box suits it well. NPD, let me know when yours get to you.
G

Thanks Mike, I'm glad you like it. Hope you get some use out of it!

Thanks Ghaile I sharpened that one on the grinder I was trying a new method it got sharp but not as even as I would have liked, glad you like it . It should be a good user.
Anthony
G

I ran out of time on Thursday (before having to catch a bus to Chicago), so I didn't get to mail mine out to Sean yet. Should be able to do that after work today...

I received an absolutely beautiful frontier style fighter from Pat Burns. I believe this gives me the distinct honor of being the largest collector of Aracdia Knives in Maine as I was lucky enought to draw his knife in last years' KITH as well. (Don't need a KITH if Pat will just send me a knife every year... ) Solid, good looking knife, sharp as hell and with a feel in the hand that a lot of makers dream about. Thanks Pat. 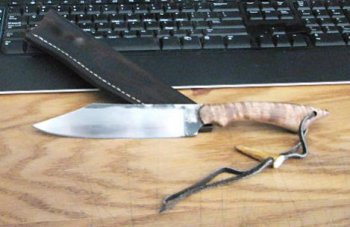 Got my new neck scalpel from Doug today! Now I definitely have to get to the PO tonight.

Nice and light, feels almost as natural as holding an exacto knife for precision cutting. Damascus is amazing as well, great choice of material.

I added a bit of Paracord for the necklace.

Thanks Doug, ya done good Sir.

Side note... bleeding finger is unrelated... i havent cut myself with it, yet. 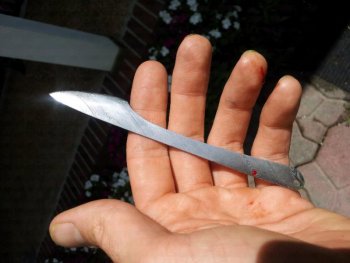 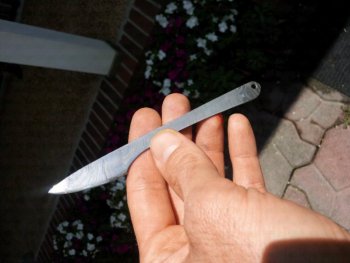 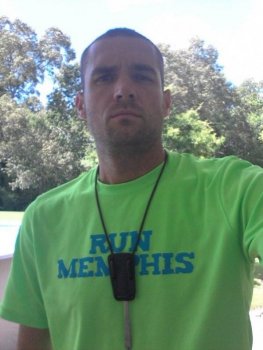