At the annual general meeting in April of 2010, George
Roberts, of Bandit Blades, put forth a proposal to have three Club
knifemakers build one knife that could be later raffled
to raise funds to support the Club’s programs. Now
after only 7 1/2 months the knife is completed.

Congratulations to Elliot Reiter, Don Stevenson, and George Roberts for a job well done. It's nice to see a group of skilled knifemakers come together and produce a one of a kind work of art.

Tickets for this knife are on sale now for $2.00 each or 3 tickets for $5.00. If you're interested in purchasing tickets please contact Ron Nelson at www.wcka.org/contact-us

Tickets will also be available at the 2011 HACS Show in Chilliwack, BC and at the KTSA 2011 Knife Show.

The draw will be done at the close of the Kamloops KTSA Show at the end of April. 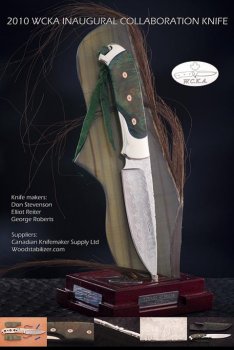