Quite Sunday in the country

Well Murph got kicked out of the house Sunday.
I felt sorry for the Dawg so I had him come out to my shop for a little Heat an Beat just to ease his mind.

It had been awhile since I had forged anything and boy was it obvious. That hammer looked like a beagle pup on its first rabbit hunt, all over the place and not finding its mark.

When I started to forge the hidden tang I was moving the steel very slow and working hard at it. Murph suggested that I use the fuller to draw out the entire length of the tang.
Duh, what an excellent idea. After 3-4 heats the tang was done. So after a couple of heat cycles into the ash bucket it went.

Well after we cut Murph’s excess material he used the fuller to draw out the tang like a pro. Then he has to tell me that this is his first forged hidden tang. After a couple of heat cycles he shuts off the forge leaves his knife in and closes the front to let it cool.

So we made a couple of, I would say, pretty good looking forged knives that are now ready to grind.

But this did happen and here’s proof

Now the truth be told is we had been planning to do this anyway and:

Mrs. Murph told him to get out from under foot while she unpacked his apartment things and put them away.

LOL, what you can't see is that under my shop attire I am wearing the infamous "overalls". Yep, you guessed it, Todd made sure the wife was gonna be away from the house all day so she wouldn't sucumb to their irresistable powers. LOL
I think Todd is planning to get him a pair or two pretty soon.

Heck Murph I got me a pair.
I haven't wore them in probably 20+ years.
May have to get them out and see if it will work with the Mrs:biggrin:

And the Mrs. will be off next weekend so on shop time, I got me sum chores:2:

Here's a pic of Todd at the anvil. I'm looking forward to seeing this one when he's finished. 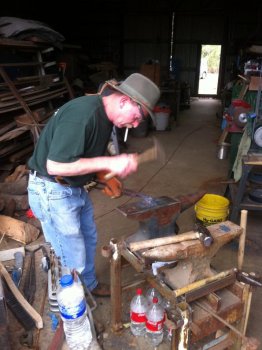 Now that looks like too much fun! Be careful Todd, the power of the overalls is a powerful thing.

Well as promised two pieces of 5160 that’s ready for the work to start.

Hey I made the photos normal size:les:

I don't think my overalls will fit anymore so I'll just have to remain resistible:3:

Thank you for posting the pics. I got to thinking (I know, scary thought), this is my first narrow tang and only my seventh or eighth blade I've forged. It still needs some work. I need to square the ricasso and taper the tang some more.

No it just shows that you are still trying to improve and are thinking ahead in the process. But they look great so far.