I was looking at something on the net and run across a post talking about have a wood carving knife for sale and here is the pic of it!! I haven't seen one of these since I left the farm.

Now remember boys and girls this a family site, so be careful what you put into print! I will tell your this much it is not for wood carving!! So anyone knows what it is please put it delicately if you do!! Lets not get this thread shut down!! 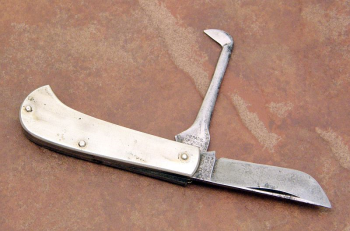 hahahaha. Ok let's seem how I can put this, that's a pretty NUTTY knife. People should have a BALL figuring this one out.
K

I think Daniel has cracked the nut for sure.

There use to be an older man in my hometown. He was kind of like the old farm vet. Never had a degree but, knew pretty much everything about farm animals. I have seen him shoulder deep, pregnancy checking cows! Back in the day he could get pretty much everything that a vet could get. I have seen him marching a bunch of cows thru the stanchions and shooting them with antibiotics. He would be a bit under the weather and reach over with the same gun he was injecting cows with and turn and give himself a shot of antibiotics with the same gun!!

I also watched him using one of these knives all day, after one of the farmers had called him to take care of the new "young guns"! Some one hollered hey there is one we missed. He had already dropped the knife in his pocket. With one hand he caught the young hog.

His other hand went in the pocket to get his knife, so you guessed it grabbed the blade with his teeth and all the nasty, stuff still all over as he hadn't had a chance to wash it off yet. Without batting and eye he finished the job and turned the young hog loose and turned with a smile and said I guess that's it, lets call it a day. He turned and dropped them in the bucket for the Misses of the house!!!

I promise you this is not a made up story! He was quite a character!!!

Castrated all our own animals, damn pigs could about make your ears bleed.

JJB11B said:
Castrated all our own animals, damn pigs could about make your ears bleed.
Click to expand...

The knives we used had a short blade (about 3 in) and a flat hook at the opposite end of the handle. This was for lambs and the knife was held with the blade out the palm side of the hand and was used to cut the end off the purse then the two offending bite were squeezed up past the opening and caught with the hook and given a smart pull. Then the blade was held against the tail which was then folded over it and with a quick cut it was removed, the ear was marked and the lamb was let loose to find its mother again. Often there would be up to 500 ewes and lambs done in the one go but with over 2000 ewes on the farm and possible 3000 lambs there would be many long days getting them all done. That was in the 60's but soon after that the gas heated searing iron came in for the tail and rubber rings for the purse whereas now it is all rubber rings.

JJB11B said:
Castrated all our own animals, damn pigs could about make your ears bleed.
Click to expand...

Now there you went and did it now!! Ha Ha!! Yeppers the pigs are the loudest of any of them!!

Von, they used to do the sheep with a rubber band, looked kind of like an O ring, and a pair of pliers that spread the ring and then slip it over,...…. and release, in about three days there voice changes!!!

I always heard you can herd cows, you can herd sheep, you can lead goats but hogs, there ain't enough hot in a hot shot. I watched my brother try to load and old sow, she was a mean one! Like to got me down in the farrowing shed, over a piglet when I stepped on its tootsies by accident. If there hadn't been someone in there with me I thinks should have got me down. After that we decided she had to go!!

She would have went about 350+. They run her up the shoot, the first time she turned around and knocked my brother down, and didn't even slow up. The second time he was ready with a hot shot, she took the hot shot and knocked him down again. The third time she started back down the shoot and my brother punched her right in the forehead, she went down on her front legs and we drug into the truck. She got in the truck got her senses back and she was ready to go to town. Like to tore the stock racks off of the truck. Went by the ER and dropped my brother and she went to the sale barn to sale her. He dropped the hog but he broke his hand!!!

This was the type off knife we used 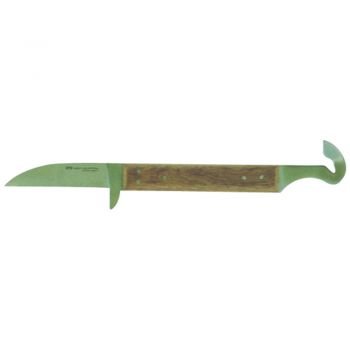 That must be something used in your region. I don't recall ever seeing one exactly like it! Looks like it would do the job!!

And like I said about the old sow we got rid of. You can have 50-60 piglets running around and when one of them squeals that sow will know it is hers. The day that happened I was just finishing cleaning down to the concrete, right before we did the antiseptic rinse and put new hay down.
I had my back to the door and steeped back on the piglet toes. It squealed out but I never thought about it, the next thing I knew she hit me and I caught the fence dividing the stalls and I almost fell to the floor.
She was trying her best to put me there when my Dad came in and run her off with a pitch fork. He told me then I intended to tell you she was going when the piglets are old enough to wean. She had tried to get my Dad a couple of days before that and he grabbed a nearby hot shot and backed her off.

I had a cousin that an old sow got him down, he was in their farrowing shed by himself. He was small built and about 10 yrs. old Before anyone heard his screams she near about ripped his ear off. The surgeon put something like 70 fine stitches in his ear and at his head to sew it back on!!