Staff member
This is kinda like a first knife pic except it's CNC instead of a knife. Pretty ugly but I'm proud of it.

Upper left corner show where I buried the spot drill and then plowed over to the next hole. Exciting stuff.
I worked on finishing the plate anyway. It's great practice.

The first tapping pass I had to do again as the threads weren't deep enough. I changed that and re-tapped. The machine clocks the threads so it didn't double thread. After that I found the tap was moving in the collet and getting shorter. Try a new tighter collet and I got the same results. The tap moved around a got shorter. I'll have to do some research on this. The collet was more than tight enough so I'll have to see what else I can do to ensure the tap doesn't move around.

In the mean time, this plate should work good enough to hold in the vise and make some one off parts. 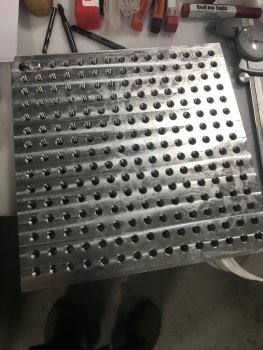 On tapping you can always change depth...and you can "peck tap" to keep a ball of chips out of the bottom of blind holes. As long as you NEVER change the start point at the top of the tap cycle it'll repeat....and as long as the tap doesn't move in the holder. Once the orientation is lost you're usually making bad tapped holes....your's look clean so how much was it moving? If your minor dia. was too tight that can fight the tap also.

An old boss of mine when looking at a small boo-boo I would occasionally make on tooling would always say...."I see you put your initials on it...." Lol.

Smallshop said:
Excellent....that's a nice fixture.
An old boss of mine when looking at a small boo-boo I would occasionally make on tooling would always say...."I see you put your initials on it...." Lol.
Click to expand...

If that is the case, I will autograph lot's I'm sure.
The hole were through holes so I wasn't worried about chips. I just ripped a 3/4" end mill across for facing it. I didn't need a mirror there but will use a proper shell mill on the next one. This was more practice than anything.