Hello all, My brother found this folder in his Mother In Law's house while cleaning up after she moved out. He's sure it belonged to his FIL before he past away 25-30 yrs ago. This photos are not that great, had to take them in restaurant using Iphone camera. I'd sure appreciate any comments as to origin, maker, how old it could be, etc. Brother feels it might be from his FIL's WWII days. There is no expectation it's valuable, but an idea would be nice. 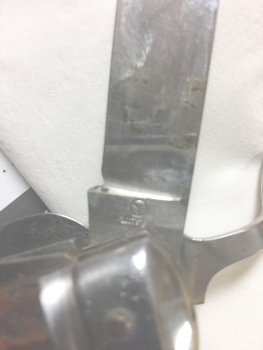 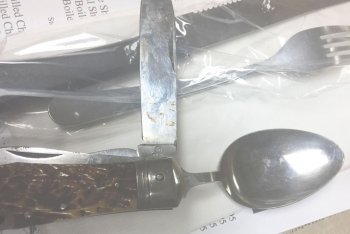 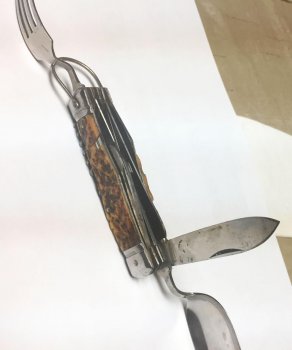 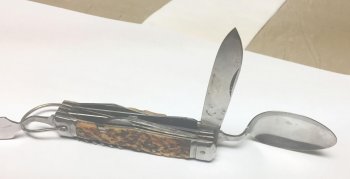 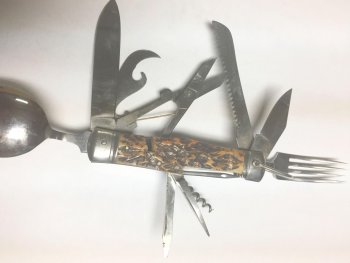 Thank ya'll for any suggestions or comments.

Ken
Thats a cool old knife. I've seen them before but know nothing of the value of age. He's lucky to have it.
K

Yep Calvin - that's what I thought "Cool knife, but don't know anything about it". Thanks for the input, just hoping somebody might have seen one or something.

I have seen some "hobo knives" as they were called by some like that. I had one when I was a kid but in moving and deploying it got lost.
I'm just repeating the name I have heard/read them called. There is an actual name for sure but they were the original survival knife. Knife,fork,spoon,can/bottle opener,scissors, and a saw. The american version of a swiss army knife

I had one exactly like that when I was about 13, which would have been 1967. The one I bought came with a small hatchet a canteen with belt webbing and canvas holsters for all of the items. If I remember correctly, I got it through a mail-order ad in the back of Popular Mechanics.

If there's a small, like 1/4 lb head, axe and an old style aluminum canteen around that would be part of the set.
K

Thanks Walt and DropPoint for your comments. That's about what I was thinking the knife was, just an old "boy scout" type knife that minic'd Swiss Army knives. HoBo Knife is a good name for it.

Well Ken I had a knife just like that. I think early 60’s. I believe I got it from SIR in Winnipeg.
Not much help but about all I can remember. Dean

This may give a little more insight:


If you do a google search for "vintage hobo knife japan" you'll get a ton of results. I see that a lot of them are listed as "1940s" or "WWII era", but according to the guy in the video, most if not all of these probably came along some time after that. Still a neat old piece.

Thanks for info - I've sent my brother an email with the video link. He'll be happy to get the info.

Have one like it but maybe a little bigger in a cheap leather holder...Probably got it 60 years ago

I remember my Grandfather had one like that but the scales were all metal and it had U.S. stamped on it. He served in Hawaii during WWII so I always wondered if it was issued. They are cool knives. I wish I had that old knife.

Staff member
typical hobo knife but also very popular in the boy scouts years back. I remember specifically spending an entire week at scout camp eating every meal with one of those because I could. Lot's of variations out there and some collectors but they were cheaply made and not entirely attractive or practical.

I seen one when I was a young kid once.

I met Lhomond Jones at a show a while ago. He had a display of hundreds of Hobo knives. He is quite an authority on them. Shoot him an email at ljones@edoclogic.com. I'm sure he can supply some information on that knife.
K

Thanks Bill - and it's always amazed me how often an old thread will pop up with new info. I'd suspected the photos of my brother's knife were so generic it would be hard to provide more info. BUT - I'll contact Lhomond Jones and see what info he's got.