How many of you use white cow bone for handles. Have you ever cut it up yourself. I would most likely whiten it bleach it with borax and then dry it cut it to size and stabilize it if needed. Im just curious if anyone is taking bones from butcher shops . I am asking cuzz last weekend went out shot 400 gophers and saw 4 dead cows from winter kill . the bones were to say the least awesome fresh white hard and not scaling . What are the best bones to take. I am looking at the lower leg bones front and back legs. I think they would make decent scales. Ive never used bone lots of horn rither deer moose elk and buffalow . Ide like some feed back as to is its too much hassle to make into scales. Kellyw

Kelly, I've used cow bones before for razor scales, never for knives. I purchased a few larger pieces (I assume they were part of the rear upper leg due to their thickness) and boiled them after removing the marrow. I let them cool in the same water where they were boiled prior to pulling them out as to try avoid them from cooling too quickly and possibly cracking. Once dry they were slabbed up on a band-saw (they smell worse than horn IMO) and watched for movement. Once I was satisfied, they were shaped into scales finished to 1000 grit. Later they were hit with some 50 grit sand paper, to mimic the natural cracks in giraffe bone, then filled the deep scratches with black super glue, resanded with 1000 grit and finished with medium CA.

They didn't give me any issues and behaved more like Axis Horn once they were dry.

They are a hard material and those like you are talking about have gone through a natural process that should make them about ready for use. The smell is not good when working them and watch breathing the dust of course. The trick is selecting a bone such as the leg bone and splitting it so that you get a useable slab. I have used the ones from pet shops and actually went through and bought them according to that use. You will usually get one slab off of the total bone that really works for a larger knife and you need to think of it that way when sawing up on the bandsaw.

Beware of bleach and borax. I know from experience bleach is not good. It will tend to make the bones brittle and if not neutralized with baking soda it will continues to cause the bone to degrade, I am not sure about the effects of borax. The natural process the bones you have spoken of is a good process. One more thing bone does not take stain/color well unless you don't want it too! :what!: Keep your hands and area clean when working on it or it will pick up the dinge and once it does it is hard to near impossible to get rid of it! It will pick-up steel dust in the pores and that can pretty much only be solved by sanding it out of it!:31:

It is hard enough that it will be hard to scrimshaw but it will chip when drilling or peining a pin if not careful. It is time consuming in a way to get it right for handle use but it is also a unique look when done right! My O2 on thesubject!

Let me link you with another thread and you can see just what can be done with bone, with the right workmanship! This has been done by one of our own

I read a paper by a guy who prepares bones for museum displays. He recommended boiling the bone a couple of times and then letting it soak in white gas (coleman lantern fuel) for a week to remove the residual fat which he claimed would otherwise leach out of the bone over as period of time. I haven't tried yet...

I've used a lot of bone in the past. So much so that people when told would save the lower legs on moose for their knives or even just make me a gift. The best way to clean them is to use TSP and boil after stripping off what you can. Frank

OK, so I got to ask what is TSP? I remember is a chemical of some sort. I have seen the designation for those initials but can't remember what it is all about!

Please explain your process from the start to finish as I have found out from experience my way of trying to save turkey bones for making a call doesn't work. The first ones I tried bleach. It got them white but it needs to be immediately neutralized and even then tends to damage the bone itself. I thought well maybe I had left them too long even though it was just for an hour plus!

Second try I tried Hydrogen Peroxide and for only a short time frame, 30 minutes or so. It bleached them but it was worse than the bleach about deteriorating the bone! I couldn't even assemble the calls as they were so brittle, ended up throwing them away!

I have been inquiring about this process every since. I know the little flesh eating beetles is the best way to get rid of the meat. However if your not doing this all the time its not really feasible. The problem is what do beyond that point! So I would really be open to hearing of your methods.

So you see you can't just throw out TSP and boil for instructions. I would like to have a detailed explanation of the entire process, cause I know what I tried doesn't work and I would like to find a process that does work!
Last edited: Apr 18, 2012

I Think it stands for Tri-Sodium Phosphate.

TSP is a Household Cleaning powder available at most Hardware stores etc..

Yes it cleans and it's cheap! Been around for 60 -80 Years. I think it still comes in a box with a Indian Teepee on a orange box.
I remember it from my parents house in the early 1960's

I go to the local pet supply and buy the big bones for dogs at $2-$4 each. I lay them outside and let them weather, dry out and sun bleach for year. Then I cut them, put them on a knife, sand it down and give it a light buff. Works great for me. Sometimes I use the whole bone on a large knife as you can sometimes find one that is just the right shape for a handle. 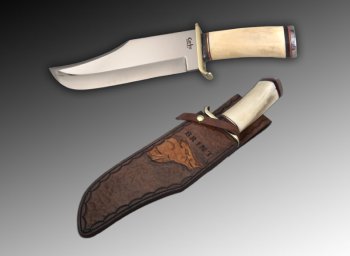 I actually just bought one for that purpose and when told the butcher why I wanted it, he gave it to me for free. TSP does stand for tri sodium phosphate and works as a degreaser and mold cleaner/inhibitor. It also works as an electrolyte for etching. I have found a number of instructions for cleaning bone on the web most of them are dealing with setting up skeletons for study though. I have found one link that gives very detailed instructions for use as insturment pieces and since they need to retain their shape and strength, I can imagine that it would work for knife scales as well. http://direct.hangoutstorage.com/ba...chments/preparing-bone--2012-930182112012.pdf

Almost everything I have read recommends against using bleach, or boiling for long periods. Boiling for a short time and then simmering is what the majority say. I havent finished mine yet, so I can't comment. Good luck.

My Lovely Bride is from the swamps of "Luuuseanna" and her uncles, who sell gator bones to tourists, showed me how to clean bones....A 5 gallon black bucket full of the nastiest pond water you can find. Put the bones in and set in the sunshine for about a week...the hotter the faster...All the little organisms in the pond scum go to work and strip the bones...then lay in the sun for another week to dry...very clean and not brittle....

Guys thanks for all the info. I have just read over some of it and it quite fascinating! Although some of it does make me worry about a bone handle knife I got out there some where. Was the bone de-greased sufficiently!!!!!!!!!

Church & Son said:
My Lovely Bride is from the swamps of "Luuuseanna" and her uncles, who sell gator bones to tourists, showed me how to clean bones....A 5 gallon black bucket full of the nastiest pond water you can find. Put the bones in and set in the sunshine for about a week...the hotter the faster...All the little organisms in the pond scum go to work and strip the bones...then lay in the sun for another week to dry...very clean and not brittle....
Click to expand...

C&S, the process you've mentioned is known as maceration and works the best. I typically clean as much marrow from the bone as possible, boil it in regular tap water and then sometimes set it out to be cleaned by bacteria as you described and regardless of the first steps, the end is the same... everything gets put out in the sun.

Thanks Mike, didn't know it had a name...works good during the summer..pretty slow in the cold.....
F

Sorry.
I was away for a visit to my son and his family. I take the bones and scrape off any flesh and stuff I can. I place the bones in say a 2 galoon a pot with say 4 or 5 tablespoons of the TSP and boil slowly for a few hours or until all the exterior material has come looise. I then split the bones remove what I can and slow boil again until clean. That's all. Best results to you. Frank

Thanks for the info everyone and Frank the TSP is interesting My friend is a taxidermist and told me about tsp. He said when boiling the horn /bone in a bleach and borax to contiually skim off the grease as the bleach helps to seperate the fat and grease from the bone. Are the lower cow leg bones the best bone to use ive seen some killer handles made from deer leg bones ,they are the perfect size. But in the thread ide like to know about cow bones. I have access to lots of winter kill from skulls to vertabrea and leg bones so if any bone is the best ide look for that in the carcass pile. Actually the carcass is all gone not even any hair so my guess is these are 2 year old and makes sense as our worst winter in 40 years was 2 winters ago. The bones are white no flesh cartliage but I would think the marrow would not be gone , I will split the bones and try your tsp as I have some mixed with borax to clean and whiten the rest.Thanks again kellyw
G

Many First Nations folks I know simply place scraped bones on an anthill. If they want a bleached look they toss the bones on the roof until they are satisfied with the appearance. Ants can clean bones very well and as good as the gravedigger beetles. I used to use the beetles years ago when I did burn research and they do a good job, but will die quickly without "food." I would not use chemicals of any kind, although the TSP is gentler than most. Boiling will weaken the bone so to some extent, although this will vary according to the size of bone. ARound here I just pick up the cow bones left over after the winter and keep in a shady spot until ready to use. IF exposed to moisture continually, like any organic handle material, they will deteriorate.
You must log in or register to reply here.
Share:
Facebook Twitter Reddit Pinterest Tumblr WhatsApp Email Link
Top