I got inspired by some recent wet grinding threads and decided to give it a go. I must say, I'm really looking forward to less dust in my small work area. After doing some research, I decided to go with a pump rather than gravity feed. I picked up a Ryobi wet saw pump at the big box home store and a couple fittings. The guy there was helpful and gave me a couple suggestions. I wanted to be able to adjust the flow without reaching into the bucket of water to turn the little dial. I had a bunch of drip line left over from doing sprinkler stuff in the back yard. Got a little needle valve thing and a little pack with "delrin sleeves" to replace the brass ones in the compression valve (they can cut into the plastic hose).

Replace the little sleeves and tighten everything up.

The little elbow that plugs into the pump posed a problem after opening everything... It was a ways bigger than the drip line, but not big enough for the line to fit inside. I'm sure there's a couple specific adapters that would allow the fit to be just right, but I'm fairly impatient. So...I hunted around the garage and found some fittings, tube, and zip ties. A little time and a bit of filing, and things were working just right. 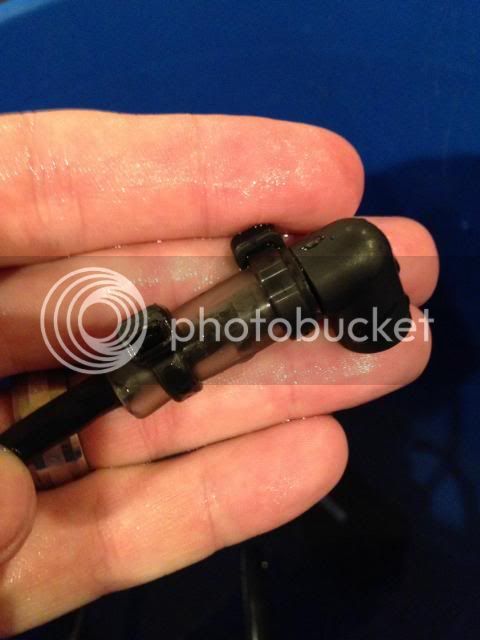 After testing it all out (and it actually worked), I got it out to the grinder. I zip tied it all together and plugged it in.

I had to help out the pump just a touch, but once it made it all the way up from the floor, it was flowing just fine.

Turned it down and it went to a trickle. Looks like it should work just fine .

I need to work on the mounting of it onto the belt, but that shouldn't be too difficult. Glad I ran into the other threads about this.

Jeremy,
Very interested on your wet WIP! So far I've your thread five gold stars.
I will be watching.
G

Here's to hoping it all goes well .

Yes indeed that sounds like a good idea. Jeremy, I would be interested in hearing how messy it gets. In my mind, its either messy and wet, or messy and dry.
G

I think it's finished...mostly. I did some testing and checking and it appears like things will work. I know I'll be fine tuning as things go along, but it seems that it at least works relatively well at the moment. I got some Lexan from the big box store, cut it to size, then used my heat gun to get things warm. Bent it around the top wheel above the platen and let it cool. Bent up some flat bar, drilled holes in both, and bolted them together. I ground down the heads that were sticking through so I could position the guard close to the belt. I used rare earth magnets to hold the bar to the platen and it makes it easy to adjust the angle/position of it. (Noticed later the nuts were vibrating off the bolts, so I added some permanent thread lock to them.)

I used more flat bar and magnets on the tension bar with the drip line. Then I bent up some flashing I had for the gutter to catch any water/spray, since it was sitting around and I also had access to a metal break to make things pretty easy. I drilled a hole in the flat bar to put the drip line through and zip tied the end of the tube to "plug" it. I did some previous testing before cutting the drip line shorter to see what would work. I used some little drill bits and pin vises to put in some holes for the water to drip through. Just a little twist of the valve on and off and it controls the flow. A little fiddling with the Lexan shield and it keeps the water going where I want it. I found out when I position it close enough to the belt, I can actually see the water it catches from flying off gathering in a wide "drop" between the belt and the bottom edge of the Lexan before falling down the face of the platen.

It looks like the metal splash guard is out of alignment, but it's just the angle of the photos.

This was a fairly old/dull belt and when I started grinding to see how it did, things still heated up, though not as quickly as before. Guessing a sharp belt that actually cut vs this one would probably stay cool longer. At a minimum, though the dust will be kept down which is huge for me and my little shop.

Thanks to everyone for great advice and help. There's no way I'd have thought to try something like this without ideas from others. And as far as the mess goes, so far so good. It's really a small amount of water, so it's not spraying everywhere at all. It definitely did throw a bit of water up the back and bottom of the cabinet over the bench, but not a lot. The metal will direct any of that and keep the wood dry. As I was grinding, I could feel the occasional very small drop of water hitting me, but nothing resembling a typhoon or requiring a full rain suit . The small amount of drops collected in the metal gutter just evaporated away.

Great wip man. Do you worry about rust? Love to see a video in use to get my head around this.
G

I don't have a clue how to get a video of this on here-never done anything but pics online... But the process so far is turn on the grinder and plug in the pump. Then I open the needle valve to the right amount of water dripping out of the holes I drilled in the drip tube (which isn't much and we'll have to see if that all makes the pump burn out over time..?). When I get the Lexan shield placed right, it keeps the water from launching off the top wheel straight at me. Instead, it kind of collects the extra that is caught and forms a sort of bubble in the small space between the bottom edge of it and the running belt. That water then drips down the face of the belt. Not a perfect setup by any means, but definitely a lot better than it was without the water (in specific, the dust everywhere).

As for rust, I guess time will tell. I painted my KMG with some metallic blue rustoleum when I got it and haven't had any issues. I live in a pretty dry climate, so I'm sure that helps as well. On top of that, I'm not using all that much water, either. And during the testing, I didn't notice any getting splashed on stuff that would rust. The only spray that was apparent has the metal "gutter" I bent up to catch it. But rust is certainly something I'll be keeping an eye on. I don't feel like ruining any of my stuff...

One thing to watch for that I experienced when spraying my belts is black gunk build up on the platen. This left very deep scratches in the platen that I had to flatten out on the 6 x 48 sander.

Thanks for the heads up, Laurence. I have a piece of that high temp glass on my steel platen, hopefully that helps. But I'll keep an eye on the belts as I go and keep checking the equipment, just in case.

The gunk puts lines in the glass too! Clean it very often.
T

Gud- thanks for taking the time to replying appreciate that!

It sounds ideal for my tw-90 love the idea of less dust and not burning tips as often I don't even mind getting sprayed I would just cry if I got rust on my new tw haha. I also live in a dry climate (co) you may be on to something.
G

Got an email from a fella that's done this on his own grinder with some advice. I may well pull the metal gutter up over the drive wheel for the little splatter. Also, he said the drip system likely could end up with the water just riding on the belt and not actually getting it wet. I may well make a couple changes with the paint brush idea and run things that way for a while to see if it changes any of the heat in the blades. Just figured I'd pass the info along .

^ A drip system doesn't just ride along the belt without getting it wet, here in my shop anyways.

A tiny stream or steady drip is all you need.