I was approach by our local WWP point man, John Nolan, to make a knife as a grand prize for their annual deer hunt. They did not know how long it would take to make a knife and the deadline was pretty quick. I mentioned it to Darren Sanders and in true blue fashion he mentioned having a blade he would be glad to donate as well. So today was the banquet and I finished my knife with 15min to spare!

The two winners were just amazed and happy to have them which made all the missed sleep and stress worth it.

Here are the two blades. Their only request was that they would be user blades with wood handles however the burl I was shaping had a large inclusion in it and it crumbled last night. I was so frustrated and feeling down but got back out there and used some white G10 instead. Anzo'ed the scales then dyed them. Once dry and wiped down I sanded the ridges with 1000 grit to create the camo pattern. In the end it was more than he could have asked for and that was enough payment for me.

Darren used Flamed Osage and acid etched his hunter. He made a nice leather pouch sheath as well. Both blades are O1 flat grinds. The winner of Darrens knife was excited and went to shave hair off his are but I warned him it was sharp. He replied he was good with a knife and went to shave the hair but instead cut himself! He hollered that knife is sharper than any knife he had used before! The other warriors told him he had been warned! 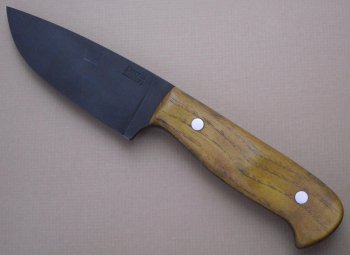 Great blades for a great cause!
M

Very great cause!! Anyone would be proud to own either of those two knives.
P

That is great Shane and nice looking knives as well. I have been doing the Wounded Warriors hunts in East Texas for several years and it is rewarding to do it. My thanks to you and Darrin for doing this. They deserve so much more than we can give.
Thanks again for your time ande effort in this.
Percy

Thank you Percy and agree. Having served myself its very near and dear to my heart.
R

Very nice work for a great cause.

Thats wonderful of you to step up for such a great cause.
M