I have a box of plastic lumber I wanted to see if I could make some slab handles
anyone have any tips for working this stuff?? Im guessing epoxy won't work to well. 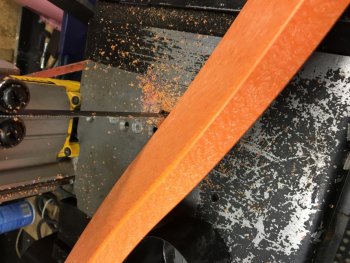 If that's the "fake" lumber they make for building decks and such, its not much good for anything knife related. It warps pretty badly in the 2x6 size it usually comes in, and that only gets worse as it get's thinner. I cut some down one time that was leftover from a friend's project, and the best I can tell is it's nothing more then sawdust and resin of some type. AcraGlass will secure it, but in knife scale thickness, it checked/split badly after a short while. In a couple of instances the heat generated by the AcraGlass "kicking" made it "bubble up". It was popular here in Montana when it first hit the market, for decks, porches, etc.....but after the first summer, when everybody's projects looked like washboards, and had to be replaced, it quickly fell out of favor.

I used to build composite decks for a living, and while they're certainly a range of quality, flexibility and durability, I'm not sure if any of it would make a decent knife handle, and like Ed pointed out, the size/thickness tends to be were you''ll see issues.

If it's interlocked together with 12" to 16" joist spacing, the stuff is about as strong as you'd ever want it. Start cutting miters and notches though, and that stuff is pretty dang brittle. We always had to pay extra special attention to how hot or cold it was that day when we installed it too. Over a 12' board, that stuff would expand and contract pretty significantly over a range of 70 or 80 degrees. If you installed a tight miter on a 15 degree day (believe it or not, we did a lot of decks in the winter time) by summer you'd be blowing decking off from the swelling. Keep it tight when it's 100 degrees out, and by January there was about a 3/16 gap or better.

For something as small as a knife handle, you MIGHT not see a significant enough amount of movement, but even still, I likely won't be very durable for the long haul.

Now, I will say that over even a couple of short years I built composite decks and railings, there was some improvement made (TimberTech and Correct Deck seemed to be at the top of the pile back then) to durability and longevity, but that was when you were paying $40+ per board for the stuff. The cheap stuff from the big box stores wasn't even on our radar. Could be that they've improved some formulas here and there, but if it's the same as it was back 10 years or so ago, I'd probably leave it alone.

I've also built decks and porches with trex and TT. this stuff is a little different, they use this to build outdoor furniture. This looks like its made in forms from resin its very dense no wood chip or glue. I'll cut some and get a close up.