this weeks work load,bunch of AEB-L,D2 and alabama damascus .need to take the alloys on thru the grits ,their at 80 now . the knifedogs oven works good but takes a while to get up to temp. and a little nail breaker i been toyin with to get the mechanics down a bit.you guys that do these all the time ,nothing but admiration for ya.

Justin, you want to get some glass or good ceramic tile on that platen and save yourself any strange grinding problems because of platen wear.
Frank

Frank Niro said:
Justin, you want to get some glass or good ceramic tile on that platen and save yourself any strange grinding problems because of platen wear.
Frank
Click to expand...

I know I do Frank thanks for calling me out on that I have put it off too long! I have 2 knives I'm about to finish when I get that cash I'm going to get one. Boss needs to get them back in stock. Thanks for reminding me.

Polishing the Urasuki on a single bevel kitchen knife today!

Justin Presson said:
I know I do Frank thanks for calling me out on that I have put it off too long! I have 2 knives I'm about to finish when I get that cash I'm going to get one. Boss needs to get them back in stock. Thanks for reminding me.
Click to expand...

Or at least take the Platen out and true it up on a 6 x 48" belts sander. That's what I do in between glass pieces.

Finally put my newly built etcher to use! Now to taper the tangs on the 10 full tang blades and start putting on handles.

Nice Chris, you have been busy! How about a close up of the new mark?

this is my new shop, 12'x24' with 8' walls. 4'x12' loft at each end. was delivered last night. i have also moved all my stuff 60 miles to the new site. moving is such fun. my pickup's transmission quit first day, my partner broke her ankle the second day, all my stuff is scattered everywhere at my partner's place(dining room, deck, carport, and little shed) and my van is full to the brim. will start today moving in to the shop. 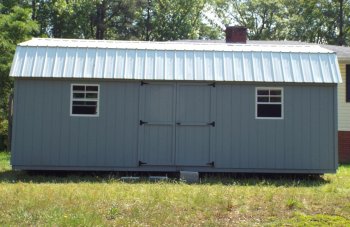 i will have a lot of time to work inside the shop soon. i got to doctor monday to schedule knee replacement surgery.
Last edited: May 7, 2015 Headed out to the shop to taper some tangs!

Here are a few I have in the works. Really awesome idea for creating this thread.
These knives are really nicely made

I've gotten busy all of a sudden. More than I want tot be. Got a big 'ol Camp Knife out of 154-CPM, 2 mid sized hunters out of O1, another Hunter/Skinner/Chopper out of 154-CPM, A Hunter out of W-2 clayed up for a Hamon and a little EDC for my Grandson. Those three Ironwood handles and bolsters are for three kitchen paring knives that are away at heat treat. 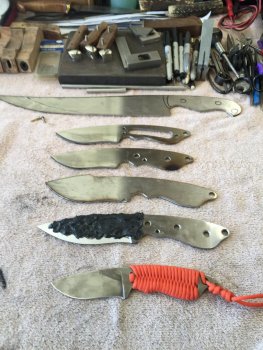 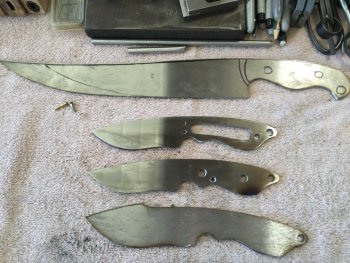 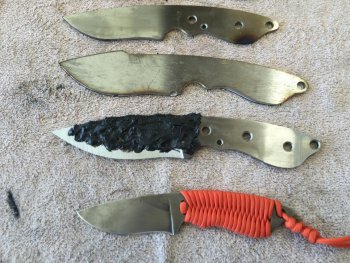 Dang Wallace you have been busy!

I was back at my home town for the nieces high school graduation and I told my brother I wanted to make a small forge. He works for a fabrication shop they do every thing from A-Z with mainly stainless steel, sometimes he goes to Anheuser Bush Budweiser plant and welds up new stuff or repairs at the brewery. So he said he would bring home some stuff and we could slap something together.
I have probably not done enough research but he had the stuff so we decided to wing it. I also learned how to Tig weld which is pretty awesome. Here it is so far.

Any of the welds that look good are his, the stuff that looks like birds crap is likely mine...lol

Finished this one just in time for my wife on Mothers Day. We have quite an array of culinary knives, but she reaches for a 6in knife without fail. So that's what I made her. 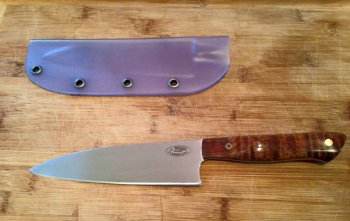 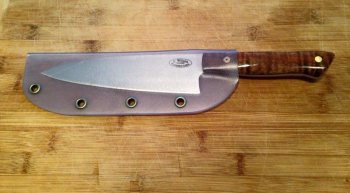 Just got done with the planning phase for my first flipper/folding knife. It was amazing how many bad ideas I was able to get out of the way using paper and plexi glass :biggrin:. Now I can start making jigs and breaking off taps! 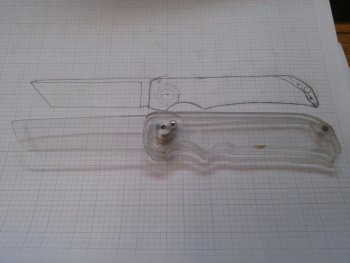 Scott, I've had a knee replacement on each knee. Don't plan on being able to move around much ! Also do the exercises recommended to you. I found these to provide lots of pain and required me to very much knuckle down to do them. They will et you back to having the mobility you should have.In the end I ended up with a nerve problem. I cannot kneel down even on a pillow without unbearable pain. No, this isn't very likely to happen to you and happened even though I had two different operating doctors. Most people get super results in the end.
Frank
G A rough sequence of what i've been up to lately... a scramaseax, a chefs knife, and a hunter.

George, that is brilliant work. They are all super nice, but that chefs knife blows me away.

^^^Nice Work Guys!
I just got some sweet handle materials!