great job on the fancy filework, Daniel. On the kydex, what is that cut for? Is that where the kydex spreads for the release / retain on the knife? That's a slick idea rather than forcing the whole mouth of the sheath to spread open. 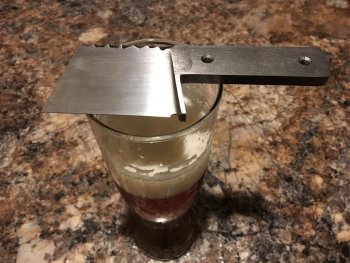 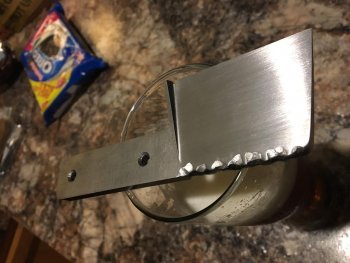 Working a mini cleaver, had no idea where I was going with this just having fun with some 1/4- 1084

Looks like you are (having fun)! I'd call it the 'Bulldog Pup'- random, I know, but anyway it's looking good. Any thoughts on the handle yet?

John Wilson said:
great job on the fancy filework, Daniel. On the kydex, what is that cut for? Is that where the kydex spreads for the release / retain on the knife? That's a slick idea rather than forcing the whole mouth of the sheath to spread open.
Click to expand...

That's kind of the idea, I have been playing with it some lately. It works pretty good sofar. I was a bit leary of it at first though.

Staff member
...
Just finished shooting a step by step tutorial video on building this liner lock using our pattern template system.
We will put together a long and short version of the video. One will show as many details as possible and a shorter one with just the highlights of the process for guys with ADD like me.
M390 blade, .076" Ti liners, 64tpi pivot set up, black/green canvas Micarta(TM), Thumb Shredder thumb stud and Ti pocket clip. 5" long closed, 8.75" open.

Editing the two videos will take several days. I'll post them up when they are done. 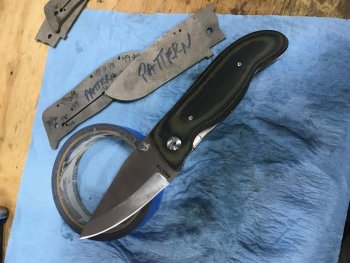 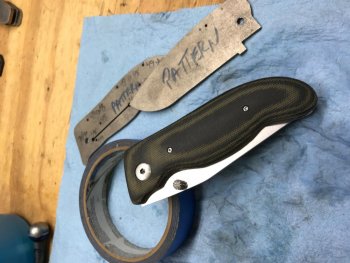 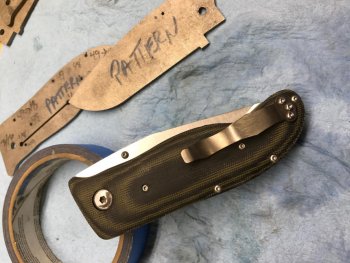 looking forward to that video. I'd like to try one of these templates.

Oh gee....Knives! Finally! I've gotten so much better in almost all the aspects of these knives...I kinda cringe at knives I made even 6 months ago.
I'm not great at writing these here captions so I'll just let you look and leave 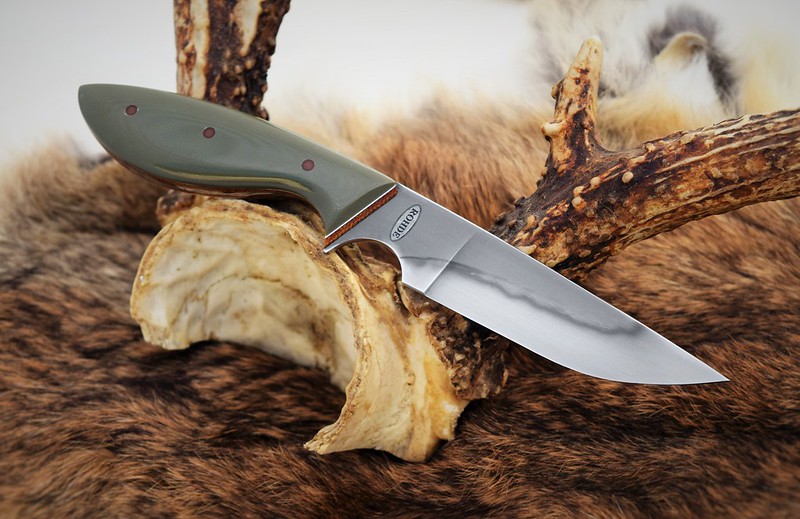 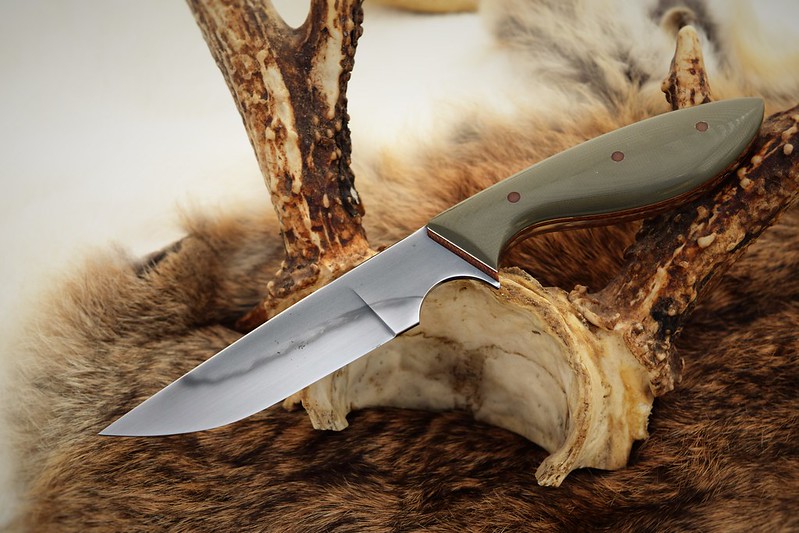 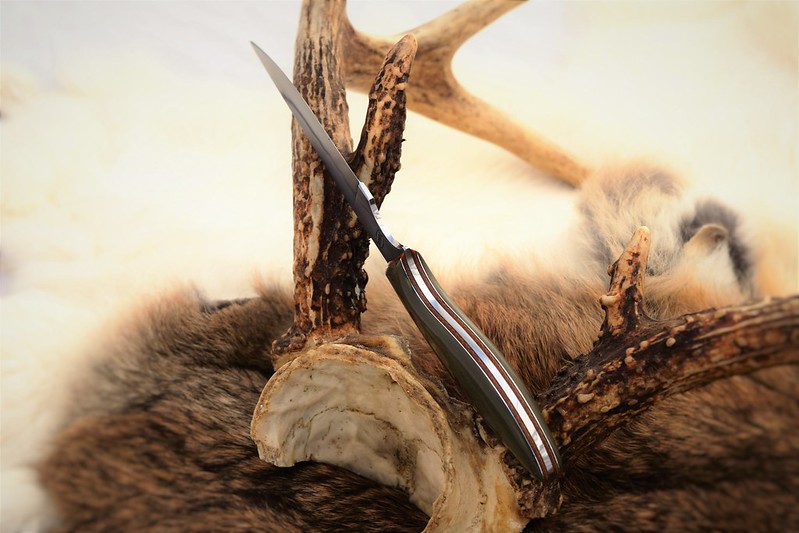 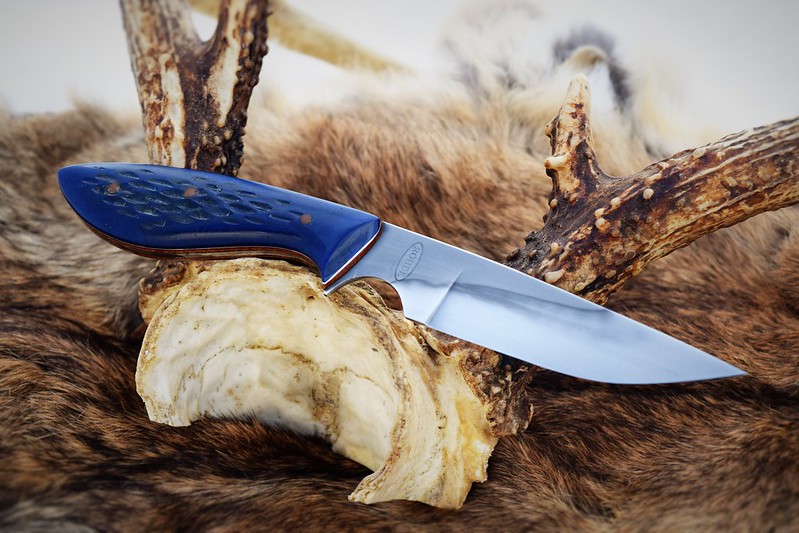 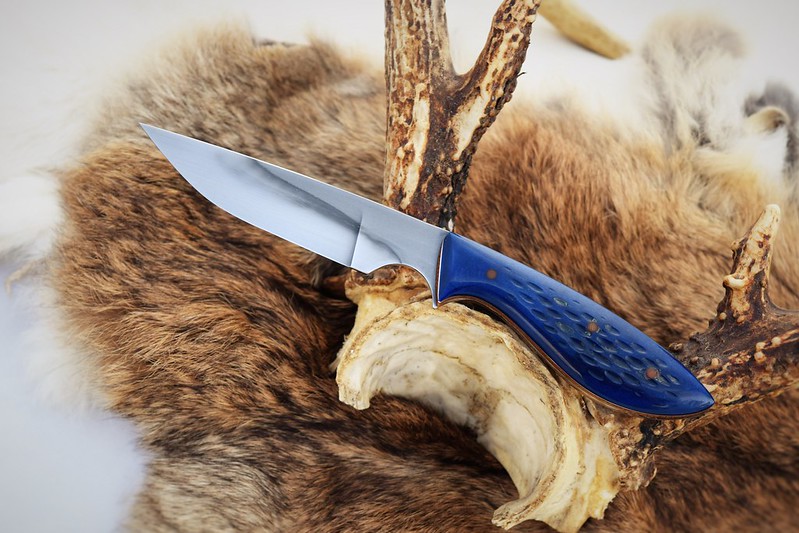 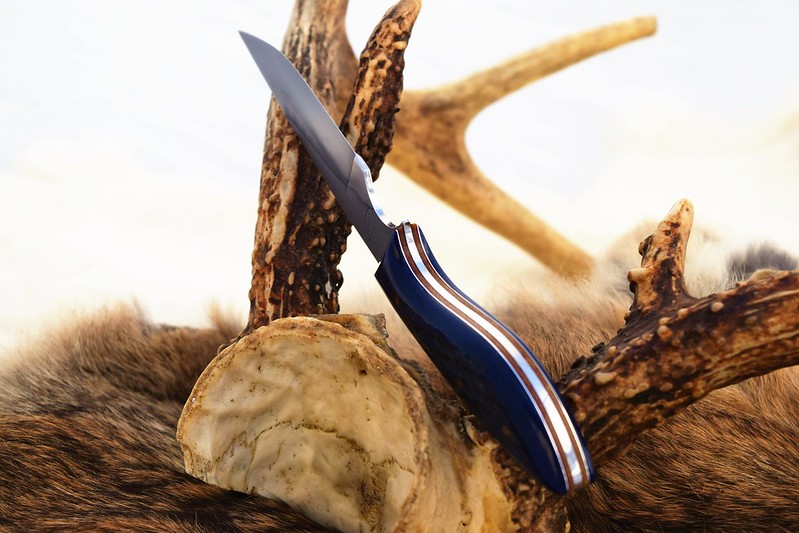 My nephews birthday/christmas present in one. The source of my vent post. Lol it also is my second attempt at using a felt liner and this one worked. Welll is soaked up 1/2 of the epoxy I used so I now understand why it is supposed to be stiffened before hand.
There is too much ugly around the pin holes due to poor bit assortment on my part.
But it is a shiny tool so he can be ok if it gets a scratch or ding in the finish. Heheeheee

Knifes finally done and now onto the sheath.

Great knife, Walt! I've enjoyed watching the quality of your work increase with each knife you make. Keep up the good work.

Been confined to the home with no driving due to medical issues, so I've had time to forge out a few knives in the past couple of days. Blades are about 9" long.
Etched lightly to remove scale???

Thanks Brandant, I started chasing the bubbles in the true oil finish, so it became a set it aside an then apply last coat w a Qtip and let cure for 36hrs then final steel wool sand an hand buff.
Its like everyone says there is always a flaw you will find in your early knives so is the best you can do at your skill level and move on while learning where the flaw came from. On the next one I will be using the proper thousands larger bit not the 64ths to avoid the epoxy circles around my pins.

Billy, I really like the first two for the traditional looks, but love the pattern of the third is going to be beautiful. I'm a bit envious of those who have and can forge blades. Lol

Walt, I want to echo what Brandant said. Your knives get better each and every time, and you really smacked a homer on this last one. The finish on that blade is beautiful and I like that you left it a tad course on the spine to get a gradient into the mirror polish. I wouldn't sweat the epoxy rings. I think it goes to the rustic finish and design of the knife. Sure, on the next one you can avoid it but it doesn't hurt this one a bit in my opinion. I'm blown away by what you've accomplished with the tools you have. That speaks volumes about the amount of work you put in. This is a damn fine knife.

Thanks, Walt. It's fun (especially the etching part...the feeling is just like unwrapping x-mas presents as a kid), but I'll tell you, my right hand and forearm are sore and tired today.
Hope to heat treat tonight or tomorrow (need more propane), hoping/praying for not much warp to deal with. I'll post pics when finished (or maybe after final etching...:3

Walt, I want to echo what Brandant said. Your knives get better each and every time, and you really smacked a homer on this last one. The finish on that blade is beautiful and I like that you left it a tad course on the spine to get a gradient into the mirror polish. I wouldn't sweat the epoxy rings. I think it goes to the rustic finish and design of the knife. Sure, on the next one you can avoid it but it doesn't hurt this one a bit in my opinion. I'm blown away by what you've accomplished with the tools you have. That speaks volumes about the amount of work you put in. This is a damn fine knife.

Thanks John, I stopped at 1500 on it and accidentally got the flat up to 1000 in spots which caused my bevel and plunges to fade into the blade. Didn't like it so I taped off the bevel and then grabbed a old piece of 600 to rescuff the bright spots back to a sheen. Then finished taping for epoxying. Is less work to scuff than it was to sand to reflective. Lol
I can imagine the ache.
I see where one could get giddy about the final patterns in damascus, I keep wanting to leave the ht discoloration/scale on some of the blades when I get them back. Just means I need to get going on the forge and try to make a hamon or differentially harden a few blades mabbe?

My wife found these on Craigslist. I did not think that a mill or lathe were something that I would have purchased any time soon. But a guy picked these up from a retired gunsmith and had no use for them. 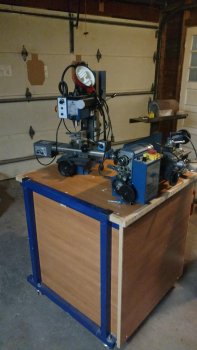 Well, I never was as patient as I'd like, so here they are after post HT grinding and a quick 2 minute etch.... John Wilson said:
Why, thank you sir! That pile of kitchen knives was two straight days of profiling. I don't want to profile anything else for a long time. I'll tell you what- I TOTALLY GET the value in having blanks water jetted now. Thanks again for turning me on to the VSM belts. I did all of those with a single 36grit and dressed them up with another single 60grit. That's about ten bucks total in belts to profile 26 blanks. And it's not like I threw the belts out- they're still good enough for rough work and the 60 is good enough for rough shaping handle material, since all it had to do was square up the rough 36grit cut along the profiles.

That's the first time I've used bocote. That's a wood that will fool you, huh? It's ugly as sin as a blank block, but by the time you sand on it some it gets really nice to look at and the color turns considerably lighter. The guy I'm making that knife for is crazy about it, which makes me very happy.
Click to expand...

Hey John,
Can you tell me more about the VSM belts, I don't think I heard of them, I've been using the belts from(....and as usual these days my mind went blank)! Anyway, the results I've been getting from those, I want to say I got them from a guy I initially found on eBay, then found that he had a Facebook page, It GOES something LIKE (HIS NAME) THE KNIFE MAKERS FRIEND, and I'm ashamed I can't recall his name, super NICE guy, very helpful, anyway the best I can recall and PLEASE DON'T HOLD ME TO any of this, as it is to the BEST of what I recall, ANY OF THAT, THE NAME OF THE COMPANY, THE NAME OF THE GUY, I'M SURE i WOULD RECALL IT IF I HEARD IT, BUT SO FAR MY MEMORY IS COMING WITH NOTHING! Which isn't a new problem, just one that'S getting worse by the day! It's a constant problem, I can't even recall my HT process for the most used steels, I've used over the past 9 or 10'ish years! It's so crazy even in conversation, I try to pull a work up and nothing's there, when I'm typing an email, I usually have to look up a word I'm trying to use, it's gotten pretty pathetic, I would have to say! I've been quiet for a long time, as I've not been able to work in the shop very much at all over these last few years. Although, every once in a while I do go out there, sometimes I just sit there looking at the walls, taking in the smells, that I love so much, sometimes that's enough to motivate me to get some work done, but one day of work ends up in a month or more of not working in the shop, i'm still working my full time job as that is what keeps the bills paid! I still lurk on here a lot, but I've just kept quiet, reading about all these amazing knives I get to see on here! As I was saying about the belts I'm using is that I've been getting amazing results with them, if I could only recall the name of the company! Is there a Phoenix Abrasives Co., out there, never mind, I don't think that's right either, anyway, can you give me some more info on the VSM Belts, I'm not exactly looking into changing, but I'm always on the lookout for equipment that will make my work better and/or save money in the process! I'm game for that! THANKS! And your work is looking amazing! You've come a long way in a short time with your skillz! Looking forward to hearing from you, Rex
You must log in or register to reply here.
Share:
Facebook Twitter Reddit Pinterest Tumblr WhatsApp Email Share Link
Top