What do you think of this size?

Of so over the next 4 months or so I'm going to get my ribbon burner forge going (no really I'm doing it this time.) and I'm thinking maybe a chamber size of 4 1/2" high, 9" wide, and 12/12 long. With the burner coming in from the side. What do you guys think of this size for general bladesmithing and Damascus billets? 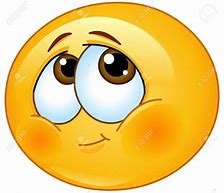 Sorry could not resist that!!

Just make sure that the before size is larger enough to get 2" of k wool and a cover like plistix or similar.

I have never used a ribbon burner for a forge but I do have one I pulled out of an old gas heater unit years ago. I use it on my fish cooker and I have had to replace the stainless steel grates on it a couple of times. It get so hot so fast that those small stainless steel grates will begin to distort and the pot doesn't want to sit level on it anymore! And it has a SS 1/2" web under that. It will heat lead in a short bit. So I would guess a ribbon burner would be a good choice for a forge. Wayne Coe might give you more insight into the ribbon burners. He has done a lot of work on them!!

The secret to tuning one is in the HP regulator and the orifice to distribute the gas into the burner!!

Thanks. I shouldn’t of posted this thread I was just thinking out loud. I was thinking I might do a stacked fire brick ribbon burner Forge and decided against that now I have a few other ideas bouncing around in my head.

Ps: Ed might have also convinced me to do a simple one burner Venturi Forge for this one. As much is I think a ribbon burner Forge would be amazing it is also somewhat complicated and an expensive project. I promise I’ll shut up now until I actually build a stinkin forge and post some pictures
K

I've been fascinated by ribbon burners myself. A couple yr ago I downloaded this PDF file - not sure where I got it but it does seem to be a good "how to" for building a ribbon burner. I wound up making venturi burner - then did a blown burner and I do like that one better. Even put a blower on the venturi and it works good. with blower the Venturi will hit 2400F with no problem. Good for welding San Mai.

I have talked to a lot of people about ribbon burners and everyone seems to really like them. I just can’t quite get myself pumped up enough to bite the bullet.

I'm the same way. I've wanted to try a ribbon burner for a long time. I'm currently very happy with my current setup and I try to tell myself "if it ain't broke, don't fix it".

My main bladesmithing forge is a small vertical with about a 5" heat which is all I work on a knife in a single heat. I do 95% of my forging in this one. Any longer heat than that is just a hassle for me. For that one, a ribbon burner wouldn't change anything. Because of the way the verticals work, the heat is basically perfectly even.

My damascus forge is a horizontal with a 6" diameter chamber 16" long. I find this size, for the size billet that I use, to be about right. When I draw it out to about 16" long, I'm ready to cut and stack again. And the 6" diameter allows me to rotate the initial billet in the forge (it's probably over 5" tall when I start). Luckily the forge is round so the heat is fairly even. Though it is a bit hotter in the middle where the burner comes in. If I ever redo that forge I will likely change to ribbon burner in it just to try it out.

I REALLY like using coal but I am very concerned about the long term health effects so I’m trying to figure out a propane setup I like.

A ribbon burner is a dream come true. Even heat, low fuel consumption, even heat! The cost is not much more than a forced air forge, if ya do some homework.
I designed mine off a couple ideas I had seen on another forum.
IMO it was and is worth the extra time and cash. 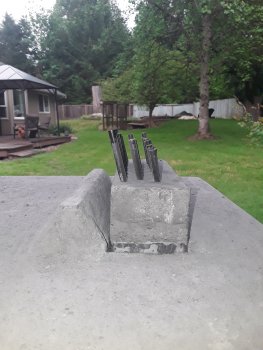 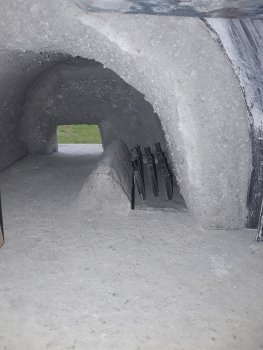 Peppie said:
A ribbon burner is a dream come true. Even heat, low fuel consumption, even heat! The cost is not much more than a forced air forge, if ya do some homework.
I designed mine off a couple ideas I had seen on another forum.
IMO it was and is worth the extra time and cash.View attachment 71308View attachment 71309
Click to expand...

Peppie, what are the pipes on your ribbon forge made out of?

Sean Jones said:
Peppie, what are the pipes on your ribbon forge made out of?
Click to expand...

They are steel pipes from the local hardware store. They sell them pre threaded at different lengths. All at 2" diam. 2" brass gate valve to regulate the air from a bounce house blower. There is a perforated 1/8" steel baffle in the long steel tube going to the burner that aids in mixing the gas and air. I used a needle valve to adjust the fuel flow.

Ribbon burners are nice.....but I just don't think they are the correct choice for Bladesmithing. I have a close friend whom I tried to tell that to....but he was so cranked up about a ribbon burner/forge that he went ahead and built it. That was about a year ago, and every time I'm at his shop, he tells me how he wishes he'd listen to me. He used that ribbon burner forge about 1/2 dozen times, and has since gone back to his single burner/blown forge for Bladesmithing, siting the cost of running it in fuel, the time it takes to heat up, and that it doesn't heat as evenly as his round/single burner blown forge.

All that being said, having a background in ornamental Blacksmithing, prior to my Bladesmithing career, I can tell you that a ribbon burner/forge is great for large/ornamental work, it just has more drawbacks when it comes to forging blade steels versus a fully round/blown single burner forge. Not that it can't be used for such, it's just not ideal. It just take more of everything to run it.

To compliment Peppie..... that forge is one of the better built, and more well thought out ribbon burner forges I've seen.....NICE JOB!! I like the "dam" in front of the burner, and where/how the burner enters. I do have one question..... are those little pipes coming out before use? If not, I suspect they will be eroded/burned off after a few used/firings.

TY Ed, the little pipes coming out of the burner are the pen blanks I used to create the ports in the cast burner. I left them in the burner for pictures to show the direction of the flame exiting the burner. They were removed before firing the forge.
I think that may have been what Sean was asking about also.

Peppie said:
TY Ed, the little pipes coming out of the burner are the pen blanks I used to create the ports in the cast burner. I left them in the burner for pictures to show the direction of the flame exiting the burner. They were removed before firing the forge.
I think that may have been what Sean was asking about also.
Click to expand...