Well it took me a while but I did get it and do have it set up. The good part is it does a great job with following instructions from Les George which I very much appreciated. This tapping head is what I would call a no name item. It comes in three sizes, the smallest is the JSN7 made for the 0 X 80 screws and a few larger sizes. I have seen it advertised in several sites in the USA, in Great Britain where they sell them for twice the price as in North America and here in Canada. I contacted Accusize Industries here in Canada who ship world wide and also bought a 1/2 inch straight shank arbor with a JT6 end to fit the tapping head. This allowed me to mount it in the new drill press jaws which had a slow speed turning speed of 206 RPM. It comes with two arbors one of which can't be used with the tapping head, which seems a bit odd, but I'm very limited in my knowledge on these shank tapers. It also came with 2 collets that are made up of both metal and a flexible material of some sort. The "brake" arm was too short for my drill press so I simply made a longer one out of a similar sized rod. The tension adjustment for this tapping head literally will go down to "0" and does allow you to make very small changes by means of a rotating collar with a set screw to fix it in position with. The tap itself is centered by means of two set screws at 180 degrees from one another and then the retaining collar for the collet is tightened. You may need to adjust these two screws to get the tap to turn without a lot of run out. I say a lot because this this is a very flexible "head". A solid chuck would mean these small tapes wouldn't have a chance of staying in one piece. I have tapped over 50 0 x 80 holes and only broke one tap because of a poor installation to begin with. I don't feel I have yet a good operating rythem but this tapping head seems able to compensate for that. I feel it's a great tool to have and sure now understand why members encouraged me to go to this auto tapping system. I believe the cost of this NEW self reversing tapping head with shank delivered to me was under $250 . Frank

Frank,
I'm glad you got one and got it all figured out.
F

Like you said Calvin, it is a good way to go if you can manage it. Frank

Does this setup work in an ordinary drill press or does the drill press have to be able to reverse its direction of spin. Or is that part of the tapping heads design?

Tapping heads are the bee's knees for anybody building folders, and/or using screws for knife construction! Before my tapping head, I could count on breaking at least 3-4 taps with each folder, trying to do it freehand.....and that gets expensive when you're paying $14 each for 2-56 taps!

My tapping head is a "knockoff" brand that I purchased when Enco used to be in business. It works great! The big key is getting the clutch adjusted correctly....once you get that down.....you will wear taps out before you break any. Although I keep 1-72 through 6-32 taps in the shop, I have created/modified all my folder patterns to utilize 2-56 screws throughout....with the exception or pivots. That means I only have to have 2-56 taps, screws, and the correct bits/reamers....so it save some materials/overhead costs. It also saves me having to adjust the clutch on the tapping head....which can be a pain, and, in turn, saves lots of taps!

The biggest thing I can tell you when purchasing a tapping head, MAKE SURE IT COMES WITH COLLETS!! They are the little cone shaped rubber parts, with steel strips in them. If you happen to stumble on a used one, especially a Tapmatic brand, and the price seem too good....ask about the collects. Chances are if the price is low, it doesn't come with collets....and buying a full set separately is nearly as expensive as buying the tapping head new!

My tapping head automatically reverses..... once I built the device that's clamped to the drill press column (the long slotted piece of steel that holds the tapping head's reversing "switch" but also allows for up and down travel).... when you put down pressure on the quill, the tapping head rotates cockwise. When you let up, the shaft of the tapping head pulls downward, and engages a reversing clutch.....which pulls the tap out. 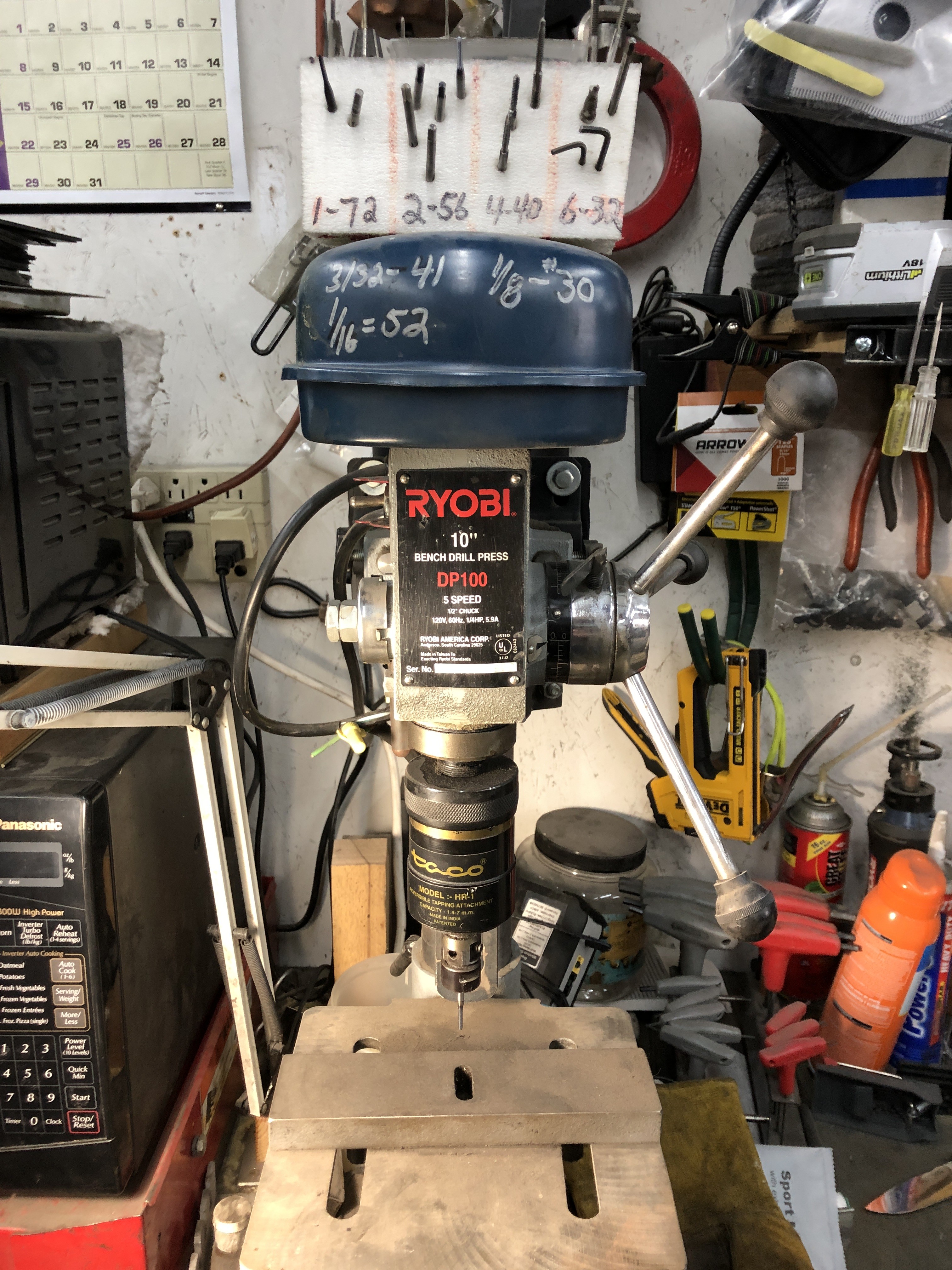 Ed pretty much describes everything you need to know about what to look for in these, I watched ebay for a long while and found a brand new tapmatic for $180.00 I think it was, that came from someone buying up closed machine shops.
these things are absolutely unbelievable. I use alot of 0-80 screws and those taps break if you look at them wrong...but no more, it zips them in and out in about 3 seconds. their worth every dollar.
I do put some Castrol moly on the tap every few holes. I have it set up to fit in my mill but someone just gave me a horrible freight drill press and my new shop is about to get started so I'll make that drill press my designated tapper.
right now I don't have room in my shop to set up another drill press, so it stay's in a box till I need to use it.
You must log in or register to reply here.
Share:
Facebook Twitter Reddit Pinterest Tumblr WhatsApp Email Share Link
Top