I'm working on a small knife (see avatar) that I was planning on being a neck knife. Up here no one seems to wear them. My time is real limited for knife stuff so I want to make the sheath (kydex) something usable with out doing two separate sheaths.

My dad loved neck knives, especially as he got older....it was always right there. I like the concept but won't wear one, so I'm leery putting a bunch of design work into a sheath that no one around here would wear. Maybe a little kydex pocket or belt clip sheath would be better?

Ted,
I use to make a small three inch blade 6 1/2" OAL necker that a buddy made little Kydex sheaths for. The only time I will wear one is when I'm out in the woods/jungle as a last ditch, case i lose my other gear.

I can't stand to have most anything around my neck, Like I hate Turtle neck shirts. All that said, Many do buy them and I sold the few batches I made, I just moved on to other stuff.

Mostly it's your urban survivalists around here that wear them.
So there is a market for neckers on the internet. The question here seems to be, does Ted have enough passion for neckers to make them and sell them on the net?

Its most likely why I stopped making them, No passion. It sounds to me that your time would be better spend making some knives that you have some passion for. You can always make some later out of some scrap pieces.

I agree with Laurence. Passion is what drives us to make knives. Set the neckers aside for a while and try something else. If the spark is still there, you can always blow it back into a flame when the need for a necker arrives again.

It's not really a lack of passion for neckers...I just don't get them. When you're out walking around the yard doing things or going for a walk your hands hang just below your belt line. So an obvious place to have a knife is at your belt. How many years has that worked out...? Uhhhh...yeah...I guess that is a lack of passion. Thanks guys....problem solved.

I'm almost ready to heat treat this little knife and then it's sheath time. I think it's going on the hip.

I do get neckers as jewelry. I see some at shows that are more art than useful and I like that someone would wear a knife as an accent to their clothing. Where I am that won't happen much except maybe the rodeo gals. I will probably make some to replace a bolo tie or something but not now. I don't think I've studied the whole vibe enough to hit the nail on the head.I don't want to invest time making something that I don't wholly understand....

I think a little sheath that clipped to your pocket and held a small knife would be cool. I'm gonna start sketching.....

Smallshop said:
I think a little sheath that clipped to your pocket and held a small knife would be cool. I'm gonna start sketching.....
Click to expand...

Ted,
I use to make a few of those and if my sheath maker hadn't disappeared from the face of the each I still would.
I have other leather people I can go to for great work, This gut just totally got it right for a little inside the front pocket sheath for a 4" OAL knife. I sold that last one or I might be able to find someone to do it, but this guy would turn them out for 10-15 bucks apiece so I could sell my "Pocket Blades" That's what I called them for a great price. I would make flatten egg type handles for them so you could grasp them with your thumb and first three fingers.
T

I wore a kiridashi I forged from W1 drill rod as a neck knife for a long time at work, until I left that particular job, in fact. In some situations, that is the most practical way to carry a fixed blade knife. In that particular job, I dealt with the public in their homes a lot, but needed a knife a lot. Neck carry was unobtrusive, but easily accessed.

Up until now, I'd say that 75% of the knives I've made have been neck knives.

The funny thing is, I've only ever purchased one (that I can think of), and including a very small handful that I've kept, they typically go one of two places: In my pocket (possibly with a lanyard clipped to my belt loop) or hanging from my rearview mirror. (I stopped doing this after one was stolen from my car)

They are my favorite type of knife to make though, because IMO, besides a kitchen knife, they're most likely to be used. The trick is just figuring a way to carry them.

Now, when I first started making neckers, I had this vision of "small and stout" (read thick and heavy). Anymore, I've found that "as light and thin as possible" is the way to go for a neck knife. You're not making a knife that's gonna be used for chopping logs in half (hopefully), you're making something that's supposed to be carried.

I make what I call a "fixed blade pocket knife" and make a kydex sheath for it. I set the sheath up so it will accommodate a Spyderco G-Clip or small Tek-lock belt clip. They sell pretty good because they're small enough to easily fit in your front or back pocket but you can also carry them on your belt in the vertical or horizontal position, clip them to a purse, murse or backpack with a 'biner... or... as I point out you can carry it as a neck knife if desired.

I don't really focus on the knife being a neck knife, just that you can carry it that way if you want to.

Smallshop said:
I'm working on a small knife (see avatar) that I was planning on being a neck knife. Up here no one seems to wear them. My time is real limited for knife stuff so I want to make the sheath (kydex) something usable with out doing two separate sheaths.

My dad loved neck knives, especially as he got older....it was always right there. I like the concept but won't wear one, so I'm leery putting a bunch of design work into a sheath that no one around here would wear. Maybe a little kydex pocket or belt clip sheath would be better?

2. I don't really make them, in reality what makes a knife a necker? To me it is the sheaths design, so pretty much any sheath with a back roll as a belt loop could in fact be strung and wore as neck knife! This is one of the few I ever made to be wore as a necker or over the shoulder. It was a friction folder made to look as something a mountain man might have carried. In that case I would have expected a true mountain man to have carried more than one knife, as his life may have depended on a knife! So another smaller knife hanging around his neck doesn't seem to far of a stretch and there is historical documentation to both, Native Americans wearing a necker as well as trappers and traders of the period!

3. So to answer the last question for myself, probably not! A necker is really a request knife for myself or something about the knife just has too say it needs a neck sheath, such as the one in the pic!
Last edited: Jun 20, 2014

Thanks guys...excellent input. A lot to think about here.
J

A few years back I bought a nice little neck knife that appears to be made out of old saw blade material about 1/16"+ thick. It's 5" overall with a 2 1/2" blade that is super sharp. It is very lightweight and makes the perfect little hideout knife. I use it as my secondary edc and use it regularly for digging slivers, nail cleaning, fish gutting and other routine tasks that a little knife like this is perfect for.

My preference for a pocket carry knife is simply a retractable blade utility knife. I use that more than any other knife I have ever owned and carry one every day in my back pocket.

If I need to gut and quarter an elk, fend off ogres, or build a log cabin with nothing more than a knife I will probably plan ahead and choose a knife better suited for those tasks. 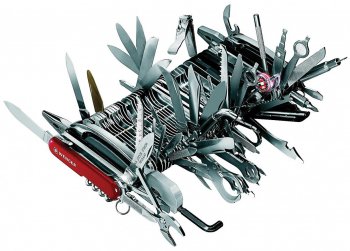 My 12 yr old thinks this is what all of us need for an edc.....I usually have 2-3 pocket/clp knives on at any given time. The neck knife thing....I would probably go for a a little knife that clipped to a shirt pocket and had a handle that just peeked over the top of the pocket....

I''m working on a "neck" knife at the moment for my brother, I doubt he will wear it round his neck, he is the sensible type and I imagine he will put it on his braces or suspenders to you trans-Atlantic types. It's light enough to wear on braces and might put a pocket clip on the sheath so it can go in a pocket or a belt, just not in the old strangulation zone. If you ask me, it's simple, don't put things round your neck, don't put rings on your fingers and certainly don't get piercings. You're just asking for an accident.
D

I work in the petro chem industry mainly in refineries and plants. Most locations require a badge on a lanyard to be displayed at all times. Folks hang everything off of their lanyard. I try to have at least 25 - 50 made up before a large outage. Large work force, away from home making good money. Never had a problem selling out at $75 per.
Is a 4.5" all metal with progressivly larger holes in handle. Either sheeps foot of standard style drop point. Sell with a kydex sheat on a para cord lanyard. For me its a no brainer, but I have a market.

thanks diamond! there are a lot of large companies that have trained folks to wear things around their neck. never thought of that.

I do think one of the reason neck knives are popular is you can take them on and off easily. I don't like belt knives (unless hunting/camping) for that very reason. You CAN'T take them off easily. That's why clip knives work so well. I'm working on a sheath for a small knife that has a clip, so you can wear it in your pocket, outside your pocket or on your belt. Then you can have a classic look and still easily remove the knife when you need to.
You must log in or register to reply here.
Share:
Facebook Twitter Reddit Pinterest Tumblr WhatsApp Email Share Link
Top