I just pounded a new sand point well. The old one didn't work well. This one might even be worse. I'm looking for someone that has a good understanding of sand point wells. What makes them work and what keeps them from working. I have some questions. Rather than writing a book let me know you are here and we'll go from there. Thank you for your time!

The last time I put down a sand point I was just a kid, in Nebraska! We pulled an old well head that had been down about 40 yrs. My dad told me him and his brother used to pull them with bars and a chain.

We pulled with chain and bar and barely moved it. We put a 5 ton hydraulic jack on it and blew the cylinder. My old man went to a friend and borrowed two old 15 Ton railroad jacks. We slid an I bean across the well shaft, chained to the pipe. We used the bottom foot on those railroad jacks and lifted on the I beam! We must have snapped that pipe a dozen times but when we finally got it out and, we found out why.

The pipe was 2" with a 2" well head. Problem was the well head had about 3" of corrosion all the way around it. So we pulled a 5" head out of a 2" hole. The sand at the depth of the well head had just enough iron in it that it literally adhered to the head! That is what eventually choked off the water supply from the well. The water was barely able to filter through the corrosion around the head! Weren't no problem to put down the new drive point well head! We went back with a 3" head, on a 2" pipe! Didn't take a lot of effort to drive it back down the hole!

As best as I can remember my old man told me we had to stay at the depth of the water so we went back to the depth of the old well head. We used an old pump jack converted to electric. But we had to prime the pump. You have to have water in the pipe for it too draw. Once you pull the initial water the pump will maintain the water. How ever if you break the pump loose or the pump looses its prime due to bad seals. You got to start all over!!

Her is a schematic of how a pump jack works! 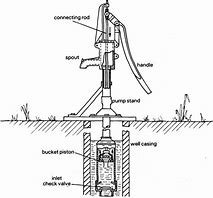 A modern electric well head works the same way, sort of! To get that pump to draw the water you have to take the priming plug out and stand there with a bucket of water priming the pump until the well creates enough pull to bring up the water from the well! As soon as you see it pumping get the plug screwed back in so you don't loose the prime. As long as none of your seals are bad the pump will hold a level on the water! I have seen it where you might have a small leak on the seals and if you don't use the pump often it will need to be primed again when you use the pump! Priming and seals are what makes a pump or well work. The only other culprit would be if the water table has changed. You may have to go deeper to get to good water! 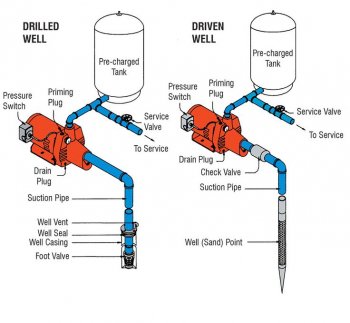 Boy you just brought back some memories I haven't accessed in a while!!! Hope some of that helps!
Last edited: Jun 22, 2019
S

Thank you for your help Cliff. At this time I dont know why it doesn't work very well. I'm 10 foot deeper than the original. I went from a 1.25" pipe to a 2". I'm 10' deeper too. It should not be a problem. Something is. I'll go talk to the city engineer on Monday. One way or the other it will all work out. Thank you for your help!

I don't get to this area of the forum very much. I read about your wife. I'm very sorry. I've been down that road. It's a hard one. Prayer for your wife, you and your family. I wish her the best of luck.

Something tells me it may be the depth thing. You may have shot thru the level of the water! That is just speculation. Don't know enough about it. Was the well pulling any water at the depth it was at before you replaced the head??

I have a submersible deep well and occasionally the check valve will hang up. the check valve in my system is down at the pump. that will drain the water back from a holding tank if you have one, then it needs to start the pumping cycle all over again from the bottom.
my well is almost 300' deep.
S

Something tells me it may be the depth thing. You may have shot thru the level of the water! That is just speculation. Don't know enough about it. Was the well pulling any water at the depth it was at before you replaced the head??
Click to expand...

Do you have a pressure gauge right at the pump, could it be something between the well and your house?
S

I have not hooked the pump up yet. Just pitcher pump.

bladegrinder said:
I have a submersible deep well and occasionally the check valve will hang up. the check valve in my system is down at the pump. that will drain the water back from a holding tank if you have one, then it needs to start the pumping cycle all over again from the bottom.
my well is almost 300' deep.
Click to expand...

Steve, up there they have a high enough water table to hit drinkable water at short distances! Even up here in NW Florida you have to go near 200+ ft. deep and all wells have to be cased. That is, unless you know the right fellar and have cash!!

How deep is the well??

You may have picked up some slime and it is blocking the head. What happens if you pour water down the well pipe?

If it is standing you have a blockage at the head. However if the water continually disappears your head is open!

If you use a pitcher pump it will still have to be primed. If the seals are not good on it they won't pull water either!!

Here is a link to some other videos that may have some good info on them.

Has anyone made a sand-point well? If so how did you determine the water-table depth?.
permies.com

Here is a cheaper alternative. 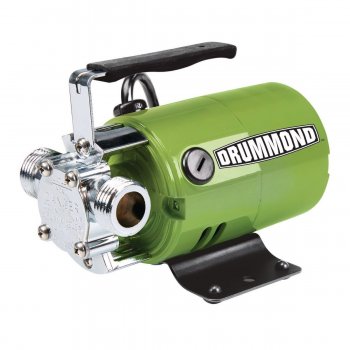 Sold by Harbor Freight for around $65.00! Go to the inlet side put in a T, tie one side of the T to the pump, the other to the well, put a threaded upright in the center of the T. Use that as your prime point and have a threaded cap with O ring inside to seal it!

Here is a link to the pump.

Here is the specs of the pump!

I live in eastern NC and we put down shallow wells all the time using 1 1/4" points and pipe.
Cliff gives a good description and I agree with him, you probably went too deep.
You must log in or register to reply here.
Share:
Facebook Twitter Reddit Pinterest Tumblr WhatsApp Email Link
Top