New Grinder for me

Hello all - I have to eat a bit of crow here. For the last yr or so I've stated pretty flatly that a pulley arrangement is just fine for a 2X72 grinder. About a yr or so ago I built a KMG clone using a 2hp, 3450 RPM 1 ph motor with a pair of 4 step pulleys. That gave me belt speeds around 1200 SFPM, 1700 SFPM, 3400 SFPM, and 4800 SFPM - a good range for the first 3 lower speeds. 4800 SFPM was just too fast for anything and grinder sounded like it was going to "take off", but boy did it throw sparks!! Grinder was always a bit noisy but ok. A couple weeks ago I decided to build a new grinder using a 3ph motor with VFD - boy does a direct drive run smoother and quieter!! I'm VERY impressed with now much smoother and quieter. A couple of photos of new grinder. 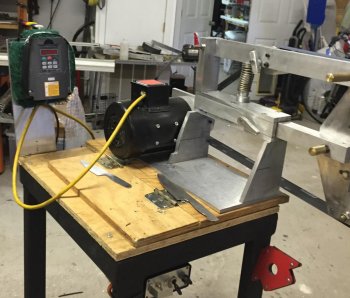 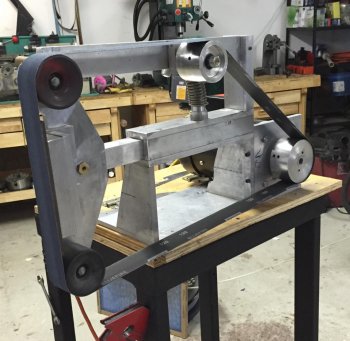 I'd always maintained the cost of a pulley arrangement was so much less, but that was "assuming" a motor, shafting, etc were on hand which was the case with my first grinder. All this "on hand" stuff saves a good bit of money. This time I purchased a new motor/VFD setup, and realized the price really isn't much more than pulley setup, IF you have to purchase all the pulley setup parts.

I ordered aluminum from a place with most parts cut to length, so all I had to do was drill holes and cut a few pieces. Having access to a lathe and milling machine sure helps. The motor mount plate has to be turned on a lathe for an easy fit.

The VFD is an open type, NOT a NEMA 4X to prevent dust from entering. The green filter I fitted around vent holes in VFD can be seen - will this prevent all dust? Doubt it very much, but for my causal use of grinder should be ok. I have a NEMA 4X box I can mount VFD in, but then holes to circulate air would be required with the same filter setup. "IF" I were grinding every day, then I'd spend the extra bucks for a NEMA 4X rated drive. I'll use this one until it fails, then depending on how long it lasts. Additional cost of a NEMA 4X VFD would only had a couple hundred to cost.

The small box just below left corner of top is a box for ON/OFF of 220VAC, a RUN/STOP switch, and a pot for controlling speed. The VFD display can be seen and displays SFPM normally, but can scroll thru for freq, temperature, and amps. The SFPM is the RPM function, but with a factor to be SFPM rather than RPM. If I turn the 4" drive wheel to 3.7", then RPM

I've found 3" skateboard wheels (72a Hardness) to work good for the platen wheels. Again, I take back all I've said about pulley arrangements for grinders - even with hinged motor base so belts can be changed in seconds, the direct drive is so much nicer!

The plywood and metal for stand were on-hand so that cost isn't factored in to the grinder cost. Note the hinged plywood - this allows grinder to be flipped to horizontal easy. I'm still learning about use of horizontal position, so have to complete support for that position. My tool rest is designed so it will work for horizontal or vertical position.

That looks awesome to me. I've got a drive that's not dust proof either, so I have it mounted on the wall a few feet away from the grinder and ran control wiring over to the grinder. You can have your push buttons, potentiometer, etc, right at the grinder while the VFD sits safely out of the dust zone. Most all of the VFD's I've seen allow remote operation. I found that the CAT 5 cable from Lowe's makes a cheap control cable and works fine.

I'm curious about that top bar, haven't seen that exactly before. If I'm seeing the pics correctly, looks like that would prevent you using a single contact wheel. Or, is it removable? I'm used to seeing the top bar stop at about the idler pulley. More pics?

The top bar is the one the idler (tension) wheel is mounted on? That is positioned so it is just to the left of the vertical plate of the platen. Remove the platen arm, and just slide the 8" contact wheel in. I also have an arm setup for small wheel attachment. Here are photos of each: 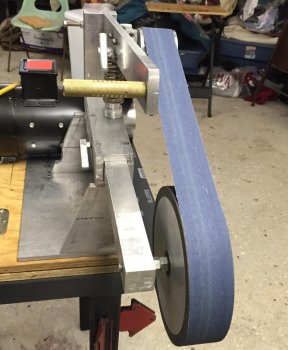 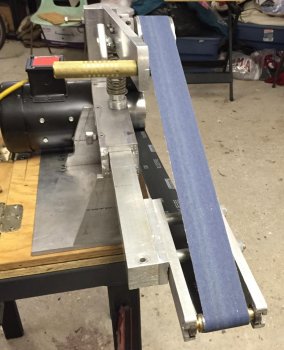 The tension bar is about 20" long to give leverage to press spring for changing belts. I like a good bit of tension on belt - seems to make belt run smoother/straighter. I had not realized just how short the KMG tension bar is until you mentioned it. I've been saying this grinder is a KMG clone, and photos of KMG on their website is what I was following when building the first one.

Those photos explain the bar ok?

I see it better now, I thought maybe that was connected to the platen arm somehow from the first 2 pics. I like it, makes sense. Your also reminding me of how bad I need to build a small attachment for my grinder. Did you see my new blade I posted under new guys section? Think I've already thanked you for steering to me that steel, but thanks again, I like it.

Yes, I saw the blade #5 - looks good. As I mentioned on the thread, it's really some impressive file work. I agree, 14C28N is so good it keeps me from trying other steels..... I mean, why tried other steels when you've found one that works so well?

Look's Good Ken. Where did you order the motor and drive from?

Hey Ken,I like that. Ill have to come look at it one day.
K

Thanks for the nice comments folks - Calvin, come on over - I'll put a pot of coffee on. I've been promising my wife a Whataburger and the place we ate at is about as good as any, so it would work for a two fold trip - give me a chance to see your horizontal grinder - that thing looks nice.