My latest and most involved to date...

Here's one that's been under wraps for a while. It was a contest entry so I couldn't share the progress pics on here or FB and Instagram like I usually do, which was surprisingly hard. 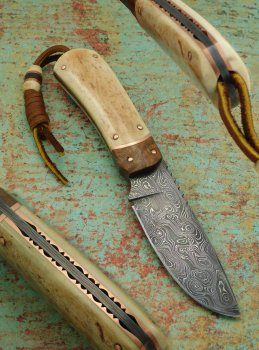 That is a killer piece!

absolutely gorgeous. The copper liner accent between the handle and bolster is a super nice touch. The domed pins with the bone scales really pop. The file work is great. The crisp angles are ssp clean and even- that had to be difficult to pull off.

Top notch!! Color combos A+.... the "look"down to the smallest detail (Like the peening of the copper pins...perfect!)

Anthony, you have been holding out on us Bubba. That one is awesome. Love the materials and how they work together. The recess for the lanyard. I personally am not a real fan of a lanyard hole in a knife but, I really like the way you achieved this one!! That is something I will have to keep in mind!


You have evolved into a whole new category with this one!!

Cliff, off topic but why don’t you like lanyard holes? I find them hugely useful out on the water, especially.

This was my entry in a knife maker build-off contest over on FB. 50 makers entered, we were all given the same pattern with a rule that your are not allowed to alter the profile in any way. The materials and details were up to the makers and you were only allowed one photo to be turned in for anonymous judging/voting. Same knife, 50 different ways, very cool idea. I had thought about suggesting we do something like this here on Knifedogs too. Actually, I have a pretty cool idea rattling around in my head, but I'd need to talk to BossDog first. Maybe after the first of the year when things slow down some.

If you did not win I would love to see the knife that beat that one...

Wow Buddy!!! You hit this one out of the park. The details are great from the liners to the hidden lanyard, domed pins and bolster spacer. Hats off to ya, you have some time in that one.
What FB group?

I want to register a complaint!


It is not MINE! Exceptional piece well done!

John Wilson said:
Cliff, off topic but why don’t you like lanyard holes? I find them hugely useful out on the water, especially.
Click to expand...

John, it is a personal thing more than anything else. I often feel they take away from the look of a knife. I would imagine over the water they might be plenty useful.

I have used a knife many a time cleaning big game. small game and fish as well. When the hand gets to that point that it is so greasy with blood or be it fat, the lanyard ain't gonna help you control the use of the knife. It may keep you from dropping it in the water or to the ground. Only one thing is going to let you re-gain control of the knife and that is stopping and wiping the hand on the grass or washing your hands in some water.

Lanyards were not in so much use a few years back with custom community IMHO. They have come into vouge with knife makers and you see them more often than not! That is what I like about this one is, it is there and yet it doesn't take away from the knife in any way. In fact it adds to the look of this knife.

As for the dislike, it is a personal preference, much like not caring for gut hooks on knives but, that is another can of worms!!

Anthony really outdid himself on this one!!

C Craft said:
That is what I like about this one is, it is there and yet it doesn't take away from the knife in any way.
Click to expand...

This one is more like a thong, which is used to help get the knife out of a fold over type sheath. I agree 100% about actual lanyards, I do not see that they add anything useful to a knife or a pistol for that matter. If I was jumping out of an airplane the stupid lanyard would hang up on the door and I would crash with the plane.

That sir is SPECTACTULAR!!

If the Mrs. Saw the way I am looking at this knife, she would slap me, then leave

Ok, bunch of guys asking me if I won the build-off, and yes, I did. But, let me tell you a secret, whether you are a new maker or an old pro, you have to take good photos. There were entries in the contest that were probably great knives, but had lousy photos. I'm still pretty new as a maker and even newer at taking knife photos. I'm not really all that great at the photos and I just use a point and shoot camera with a homemade light box. But, my point is, in this new social media world that we all live in, you'd better learn to post better pics if you want to win/sell. I have a video on my Youtube channel of making a cheap light box and I've thought about making a new video about knife photography. I just never felt I was good enough at the photography side of things to show anyone else. I could if there's interest.

I think you underestimate your abilities Anthony. So many levels of excellent in this one not the least of which os the photo itself. Would like to see your light box a thread on your light box.

Beautiful knife, beautiful photography. I think the more detail found in a knife the more important the photography. This knife is packed with detail and I can see it all. Skillful!

MikeL said:
Beautiful knife, beautiful photography. I think the more detail found in a knife the more important the photography. This knife is packed with detail and I can see it all. Skillful!
Click to expand...

Thanks, I agree. Since I was only allowed one photo entry, I had to try and get it all into one pic. Even then, I didn't really get to show the thumb jimping I did, which had a little extra detail.
You must log in or register to reply here.
Share:
Facebook Twitter Reddit Pinterest Tumblr WhatsApp Email Share Link
Top