It's been a while since I've posted...

Spent the weekend getting a light box setup. It's been something I've been meaning to do for several years. Finally did it. Thought I'd post some details as a way to give back to the forums I've learned from over the years. Maybe this will give some of you the inspiration to bite the bullet and give it a try.

I used a cheap 24"x24"x24" double wall cardboard box. Top, bottom and rear were covered with white poster board. Three holes were cut into the box. One rectangular hole in the top, about 6" wide by a 12" long. Two 18" by 18" or so square holes on the sides. Picked up some white cloth, and doubled it up for 'curtains' on the top and sides with the holes. This allows light in, but keeps it 'soft'.

Notice in the picture, the lights were placed low and to the front on the side holes, and near the front on the top hole. This seems to be the best for knives, mirror reflective or other wise.

Lighting is three 4000K color temperature LED halo lights, 1500lm each. The two on the sides are hooked to one Lutron C*L dimmer, and the one on the top is also on a dimmer (hardware store, or elsewhere). The lights just sit on the edge of the box, with the halo mounting springs holding them in place. The dimmers allow adjusting brightness of the lights to achieve desired brightness and shadows for a given effect. It also allows one to keep the overall brightness in range for what the camera will need.

The front flap on the bottom side of the box is also covered with white poster board. This allows you to bring up the lower flap, and give a mirror polished knife a good white background reflect to the camera. 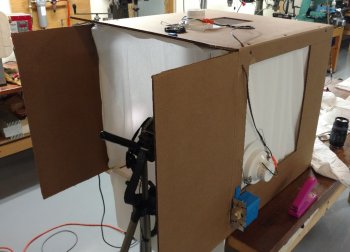 Now, on to using the light box. Let me preference this with, I'm not a photographer! All this was figured out the hard way, and with a few web searches. I've got an old Cannon DSLR, It does a good job if set up properly. That, took almost a day to get worked out! So, some shortcuts for those who may have similarly adjustable hardware, may appreciate a few quick pointers.

The first thing. Clean your lens! Dirty lens makes for bad images! I shot three knives worth of images, before I looked at them... ...and had to clean and re-shoot!

After that, use a tripod and timed or remote trigger. To get good images you need a long shutter time, and very very still camera!

The next is the ISO setting of the camera. Set it to ISO 100. You're shooting stills, so don't need a 'fast' 'film'. You get really grainy noisy pictures if you don't.

Crank your F Stop numbers up. 25 to 36 if your hardware goes that high. F stop is the aperture size in the camera. Smaller hole gives a longer 'sweet' spot for the focus. It give you the ability to see both the close and far parts of the knife at the same time. This does require more light however, via more light or longer shutter time.

Once your F Stop number is cranked up, you will need to adjust your shutter speed to get enough light into the sensor. My camera has a setting that lets me fix the F Stop value, and it adjust the shutter automatically. If there's too much or too little light, you can adjust the brightness of the lights with the dimmers to make up the difference.

Use a custom white balance photo, if your camera supports it. Basically you shoot a photo of a white object with your expected settings, and the camera uses that to adjust the colors to make white white. This is probably even more important with LED or florescent lights. It really helps with color.

If your camera support white balance bracketing, use that also. This is a setting that takes three (or more???) photos at once, each with a slighty different white balance setting. It gives you three slightly different colored images to choose from. This is really handy.

Again, these settings are one a 12+ year old camera, with stock lens. (They're probably really cheap now, if shop around!)

I've attached a couple of examples.

Pick some backgrounds that are easy to use. A while back I picked up some cheap flooring samples from one of the big box stores. The vinyl are nice, they won't scratch the knife. The ceramic tiles look good, but are hard enough they may scratch a knife so use caution.

When I started looking at the shadows and reflections rather than the knife, I started to get better images. Pay attention to those more than the knife. Move the camera and knife around until you get what you want.

The reflective knives gave me the most trouble. The trick is to make anything shiny on the knife reflect something white. Angle it so it looks at the white sides or top of the light box. Prop it up to get the angle you need. I also used the bottom flap of the box (covered in white poster board), to give the knife something white and reflective to look at below the camera. Also, if you can see yourself in the camera, change the knife angle. The reflective detail is similarly hard. Just adjust until it looks good in the camera. Playing with the dimmers on the lights helped me a bunch. 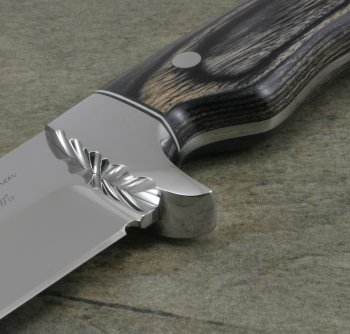 The other trick that looks nice, is lift the knife up off the surface, to show more shadow below the knife. A small rolled up strip of masking tape to space the knife off the background worked well. The added shadow gives a nice break from the pure whit background in this case. 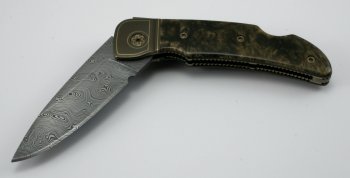 For detailed stuff, just get the camera close into the knife. play with lighting. Here's where the reflections from adjusting the lights seemed to make a big difference. The difference in contrast these generated caused the knife to 'pop' more. 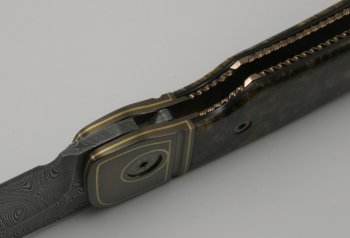 Lastly shoot, shoot, and shoot some more. Digital photos are cheap. Adjust the light many times, and shoot a bunch as you do. When I did that, I started to see big differences in how a little more or less light affected the knife and shadow. A lot of photos looked the same in thumbnails, but comparing back and forth you could see a big difference. 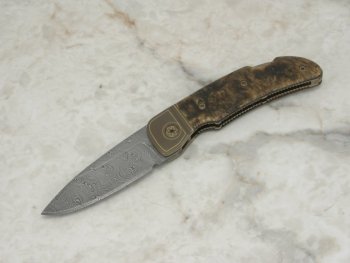 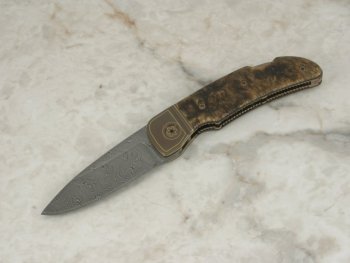 Anyway. This is my first shoot, with a couple of knives. About $100 in materials and a weekend was all it took. If I can figure it out, it can't be that hard!

If you all have any other points, please post. I'd like to get better at this, and save a few$$$ in the process!