Had a Doc appointment this morning, and since the wind was near zero (a very rare thing where I live), I decided a bit of sighting-in, and a little longer range practice couldn't hurt. 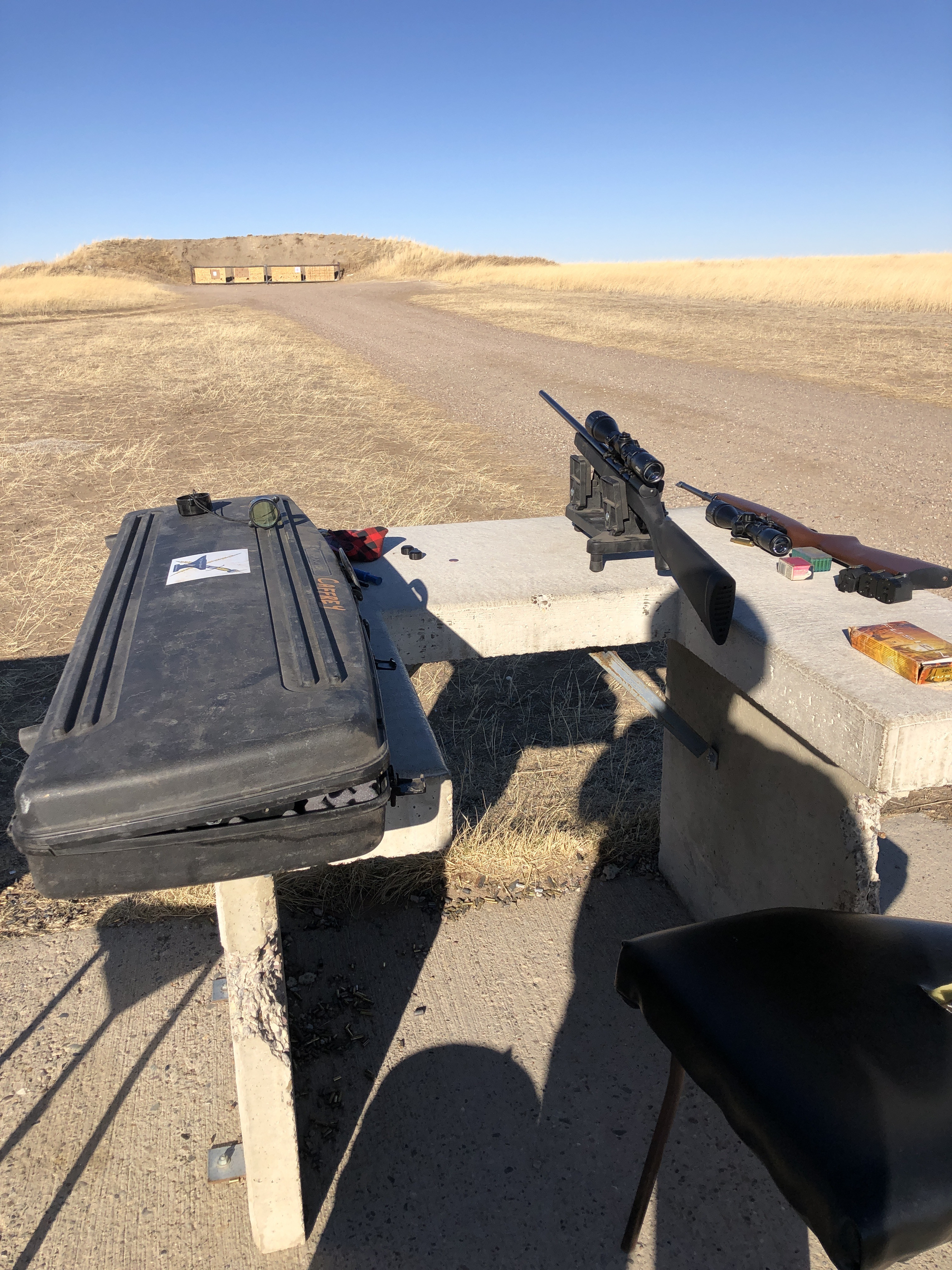 It always feels good to get some therapy! Ammo being like hen's teeth, and components being even worse, my range time has taken a serious hit. I'm happy to see you feeling good and getting out there in the sunshine to throw some lead downrange.

That is a great day!!

EdCaffreyMS said:
along with a new .17cal
Click to expand...

That .17 looks familiar - a Savage? Nothing quite like throw'in darts! Only a couple more months until the gophers come up.

I built a .308 a year ago and because of Covid I havnt even shot the darn thing!!

Gun powder in the nose does wonders for one’s outlook on life. Glad to see you enjoying your day!
C

You forgot one or two of the little ones. Can't let those magazines take a set, gotta empty 'em once in a while. If it weren't for probably being in the twenties, there might have been a gopher or two out, right at the range.
K

I'm still fairly new here and had no idea you guys liked the smell of Hoppes. Figured you were mostly Tru-Oil sniffers. Glad you got to get out and enjoy it, Ed.

Looks like fun. I haven't been to the range since Covid hit.
K

That is one serious shooting bench - very solid it looks like. Boy do I LOVE the smell of gunpowder. Is that a 100 yds? OR really long range? The only .17 caliber I've got is a Benjamin {g}

It was a very limited shooting day! Every time I busted a cap, my mind said..... "that's one less of those you have!" That pic was of the 100yrd range. It was only 28F yesterday, and that darn concrete is COLD!

I just purchased the .17 (yep...Savage A17) two weeks ago.... well I should say Cindy purchased it.....bless her heart. I asked her to stop on her way home from the grocery and buy it (she's still keeping me pretty secluded until I can get the covid vaccine).....and she did! (That's Montana for ya..... gallon of milk, loaf of bread, OH! and give me one of those rifles while your at it! )

It's the first Savage I've owned with the "accutrigger"... it's a little strange feeling, and takes some getting used to. On the A17 it says the trigger is 2.5lbs from the factory, but it felt much heavier to me.... comparing it to the timney trigger in my 6.5 Swede that is right at 1.7lbs. The A17 trigger is adjustable...and I ended up taking it as low as it would go....sorta OK..... maybe I just need to get in there and polish the parts a bit. No matter were I set it....the trigger felt gritty. That being said, it's a fun little gun to shoot. and once dialed in, it'll dump an entire 10 round mag into a 1/2" group at 100yrds. That's more then good enough to splatter gophers and prairie dogs!

The whole reason for the trip was to check the zero on the 6.5 Swede. I pulled a whitetail doe depredation tag for a local ranch, from now until Feb 15th. It's not really "hunting".... more like "killing"... I suspect it'll be a short ride in the UTV from the ranch house, to the first coulee, drop one, gut it, and head out. But that's OK.... these are some of the most sought after whitetails around, because they eat everything the cattle do.... which means they are not like most deer around here...which tend to be really strong/gamey flavored.

EdCaffreyMS said:
Every time I busted a cap, my mind said..... "that's one less of those you have!"
Click to expand...

Just to throw this out there, but I had a great experience the other day. Midsouth Shooters Supply isn't one that I normally use, but back in November they let me put some powder on backorder. I was shocked because almost nobody has allowed backorders on components for a very long time now, which is why I placed it with them. Not knowing the company, I forgot all about it figuring they'd just cancel the order as time dragged on waiting for supplies that would never come. Well, I got an email a couple days ago saying that the powder came in and was automatically allocated to my order, and would ship asap.

I am shocked. They could have canceled all backorders and then sold the new stock at today's extortion prices but they didn't. (that has happened to me several times before with other companies.) In this day in age you really have to support the good companies out there. Midsouth just got a loyal customer out of this.

EdCaffreyMS said:
these are some of the most sought after whitetails around, because they eat everything the cattle do.... which means they are not like most deer around here...which tend to be really strong/gamey flavored.
Click to expand...

Yep...these deer raised on wheat sprouts and wheat taste mighty fine! We get enough kalispell area hunters up here to make guys grumble. Apparently the Kalispell folk do not enjoy their pine flavored deer. Maybe another thing is the large bodies on the on the deer that aren't hustling for food...makes for nice full freezers.

Just picked up this 39A golden Mountie. Haven had a chance to shoot it yet.

And no snow, what a great day for grabbing some range time! I take my family out for shooting several times a year after the weather turns nice.
The kids go to school and when the teachers ask what they did over the weekend they always cringe when the kids answer them.

I grew up with mine and my brothers shotguns and a .22 in a rifle rack on the wall in our bedroom. We never dreamed of taking a firearm to school because we knew what Hunting Safety School and our Father had taught us. After school my chores were to feed and water the animals, when that was done (season permitting) I would grab my shotgun and the dogs and go rabbit or quail hunting.

I'm glad that you got some range time in Ed, therapy is a good way to describe it.

KentuckyFisherman said:
I'm still fairly new here and had no idea you guys liked the smell of Hoppes. Figured you were mostly Tru-Oil sniffers. Glad you got to get out and enjoy it, Ed.
Click to expand...

CLP is my go to gun oil but there it seems like there is always a little orange bottle laying around in the bottom of the range box.

Fresh off the bench.

tkroenlein said:
Fresh off the bench.
Click to expand...