I have always looked at these and said, "one day". Tomorrow is my day after waiting 50+ years. 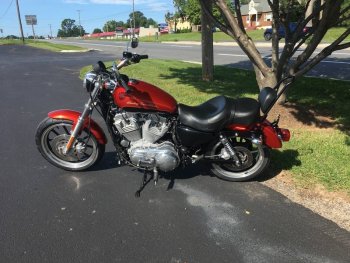 DanF said:
I have always looked at these and said, "one day". Tomorrow is my day after waiting 50+ years.
View attachment 65365
Click to expand...

That sure is a nice bike!

Nice ride - but be careful on the road. Especially if you've not been riding much over the years. A simple little fender bender.... well, there is really no such thing on a bike. Been on bikes for around 60 yrs, started on moped when 10 or 11 yrs old. Got a 165 Harley 2-stroke (called a Hummer) at 12 yr old, started riding a '74 Harley (hand shift, suicide foot clutch) a few months before I turned 16 and could legally ride and get a driver's license.I started riding goldwings in 1997 and now at 71 yr old I'm riding a 2007 Goldwing.
Last edited: Oct 4, 2018

Congrats! Just be careful.
My story is like Ken's above, but I started sooner. My first Harley was a 1949 '74 with a suicide clutch too. Rode Harleys, kawasakis, and later Goldwings all my life until about 15 years ago.

When I worked at Hughes Tool Co. in Houston, one of the guys asked me how I got to work in the rain on my bike. I told him I used an umbrella.

As a side note, In order to be safe riding a bike, you need a huge awareness zone. I always knew automatically whether another vehicle was near me. Side, rear, all around. Always. Seemed to be a sixth sense.

Thanks for all the thoughts guys, and I really appreciate the safety reminders.
I started riding when I was 16, before I even had a license, I was riding my brothers Yamaha 350 to school every day; that was a knucklehead stunt for sure!
Always wanted a Harley, but loved my Honda's and Suzuki's through the years.
I will say this now, my Japanese bikes were much more comfy rides than this one.
Had not ridden in the past 6 or 7 years, was grinning ear on the way home.
K

Dan - as any "hard core" biker will tell you, if a person has to ask why to ride a bike as basic transportation, they'll never understand the answer. Much the same for old Harleys - if you have to ask "why harley", you'll never understand.

Like ya'll a bike was my basic transportation for many years - I'd put 2 to 3,000 miles/yr on the cage, and 20K+ on the bike. A cousin once told me I was the only person he knew that's ride 600 mile round trip to take a day ride with friends. I spent my time on Harleys, Honda, then finally in '97 got the Goldwing. They're not called the "RV" of bikes for no reason. A GW just can't pass a Dairy Cream! {g}

At a biker bar I used to visit on "food night" I'd ask to park my old GW close to the Harleys hoping some "soul" would rub off on my GW - got a laugh from that, and when they saw 140,000 miles on the GW it got a tad of respect.

A little bit of that which you fancy does you good.

If you can afford something, go for your dream.

Be safe, there are idiots out there.

Bwaaahahah That is funny right there. I have worn out three motorcycles in the past 13 years. The latest was a 2008 Kawasaki ZG 1400 concours. I just sold it and it had over 110,000 miles and still going strong. Knives and motorcycles...may be a connection there.

Chris Railey said:
Bwaaahahah That is funny right there. I have worn out three motorcycles in the past 13 years. The latest was a 2008 Kawasaki ZG 1400 concours. I just sold it and it had over 110,000 miles and still going strong. Knives and motorcycles...may be a connection there.
Click to expand...

Your forgot one there Chris, - Guns, knives and motorcycles
BSA was my drug of choice, starting with the C15 250 single, with '67 650 thunderbolts and a hot '67 650 Lightening powered 40's styled custom (foot clutch/hand shift, springer fork etc) with a 440 Victor in the mix as well. Had a Honda 750 supersport and a Kawasaki 750 twin (in Australia) as well but prefered my Brits. Rode a Harley and with a lot of Harleys Dukes and Guzies along with the general run of japanese bikes over the years.

I got rid of my honda shadow 1100 7 yrs ago...still have an old Greeves Griffon project bike...now I just collect pics online...lol. 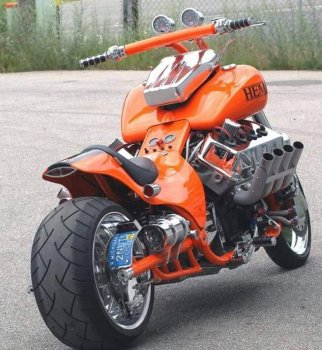 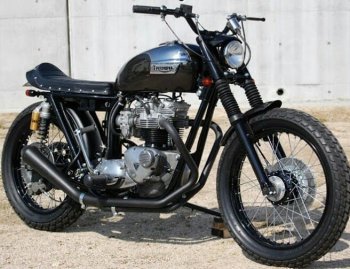 Collecting pictures is a LOTS cheaper (and safer) than collecting real bikes for sure. Can you imagine putting something like the top photo between your legs? Talk about "exciting" {g}

I went thru the "custom" bike phase also back in '70s. First "custom" (chopper) was an old Harley done in late '60s - I remember seeing a letter to editor in one of the mags around that time asking how to chop a bike...... answer: get an axe. That was a long time ago. I think I've still got a photo somewhere of that old Harley. The later bikes sure looked a LOTS better than the first one. Extensions where slugs in the front tubes. Yea, they actually sold slugs back then to extend front forks. I've always been cheap so a gov'ment job made the slugs for me at work.

The only non japanese bike I have any experience with was a Ducati ST4 I rode for a while. Great bike.

Yeah, I forgot mine. I prefer the big old road hogs myself.

Had my first ride Saturday, grinning from ear to ear like some kinda idiot. Early autumn here, late-day sun filtering through the trees, wood smoke smell in the air, riding along a bottom where the road followed alongside the river.
I had missed this.
K

Triumphs are nice bikes. My brother purchased a new one back in '70s - just like a Harley....... it was leaking oil on showroom floor.

Fall of year is a really nice time of year to ride. Enjoy.

I got rid of my honda shadow 1100 7 yrs ago...still have an old Greeves Griffon project bike...now I just collect pics online...lol.

Triumph Motorcycles were a main employer of Coventry factory workers in my youth and before.
Twas the ambition of young lads to obtain a 200cc Tiger Cub when they left school, started work and earned a few quid.

The bigger Triumphs were a familiar site in this area, the 350cc being another popular one.

My friends much older brother fresh from the army had a bigger one still, forget the size , he became careless and a severe crash victim, he did eventually heal up but never rode again.

My parents were against me having one but the old man gave in for a peaceful life and bought me a used Royal Enfield Clipper, then a Crusader and after that I was on my own and my last bike was a bright red Norton Dominator which was a pig to kick start.

We had a 'straight mile' lane near where we lived, there were NOT any motorways here then, I drove down it without using handle bars and threaded a bodkin with twine and won a fiver which was a appreciable sum back then.

I only had one minor accident and it scared me into going for cars which I had more shunts in, lol.