Annealing can be considered the first in line of the various heat treating operations if only because it is the annealed condition that most all of our steel arrives in. What is annealing? It is hard to define it by the mechanisms of the process since it is a treatment used on many metals with very different multiple internal effects involved, so it is probably best described by the desired goals of the treatment. From this standpoint it is much simpler- annealing is the ultimate stress relieving and softening operation, with the goal being to prepare the metal for easier subsequent shaping.

With non-ferrous materials, copper, silver, bronze etc…, where cold working is common, annealing removes the strain hardening effects of deformation and allows further working with ease, minus the threat of cracking. With steel it is most often used to facilitate easier stock removal via sawing, milling, drilling and grinding. But when properly used an anneal can also be a valuable pre-treatment to final hardening in setting up a stress free blade and even internal condition. Depending on the metal, various transformations, precipitations may occur but most traditional annealing involves recrystallization to wipe the slate clean. However other methods specifically for steel, as we shall see, are not limited to this and offer us many more possibilities.

As we examined in the thread Basics of Heat Treating, steel is a mixture of iron and carbon and basically all of our heat treatments are a matter of rearranging that carbon in the iron. Carbon is a very small atom in comparison to iron, so it can actually rest between the iron atoms when a solution is made of the two. In this position the carbon acts like wheel chocks, interfering with the motion of the iron atoms sliding past each other to allow deformation of the steel. Hardened steel has the most possible carbon trapped in these positions of interference, so logically if one wants the softest possible steel they will want the greatest separation of carbon from the iron/carbon solution. To accomplish this, the carbon is pooled and bonded together into carbide.

As with the other treatments, temperature is the tool we use to place the carbon where we need it. A traditional anneal involves heating steel to a temperature at which all of the carbon is dissolved and scattered throughout the iron. This creates a whole new set of crystals made up of this new solution within the steel and in replacing the previous crystal grains also removes any strain effects with a new pristine arrangement. But it is how one cools from this temperature that determines a successful anneal.

The slower the cooling, the more widely separated the carbon will be from the iron matrix, and thus the greater the removal of the wheel chocking effect. To facilitate this many folks have used insulation of the cooling blade in materials such as vermiculate, wood ash, lime or other materials. The structure, or phase, formed by this separation of iron and carbon is known “pearlite”, which is made up of alternating bands of iron carbide and iron which scatter microscope light to give it the iridescent appearance of mother of pearl and hence its name. The individual bands of carbide and iron are known as lamellae and thus this form of annealing is called “lamellar” annealing. 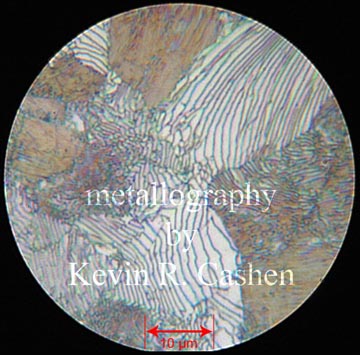 This is lamellar annealed steel with resulting pearlite

Steels with less than .8% carbon, when lamellar annealed, will form pearlite with leftover iron and thus respond well to softening with this method. Steels with around .8% carbon will make total pearlite with no leftovers and thus also responds rather well to slow lamellar annealing. But steels with more than .8% carbon along with the pearlite will form heavy sheets of excess carbide that will be the bane of mills drills and other cutters, as well as complicate matters in subsequent heats that need to dissolved them. For these steels a new approach is needed.

Speroidizing is a very handy method of annealing used in industry which does not involve total recrystallization or full solution. In fact it works solely with taking the carbon out of solution in a much more even way. Using lower temperatures it causes the scattered carbon in the existing grains to ball up and form little carbide spheres in a soft iron matrix rather than alternating sheets. This results in a very soft steel for both moving and cutting and totally negates the orneriness of steels with more than .8% carbon. 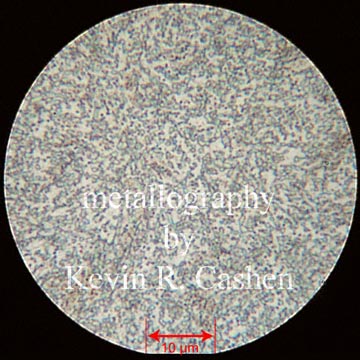 This is spheroidized steel with the resulting spheroidal carbides

How to do them simply:

With steels at or less than .8% carbon, that you wish to lamellar anneal, heat to above the non-magnetic “critical” temperature, around 1500F should work well for most and then allow it to cool as slowly as possible by packing in an insulated material such as wood ash or vermiculite, or even a cooling gas forge. If one owns a kiln a short soak and then shutting things off ans walking away is easy enough as well.

With steels above .8% carbon, that you wish to spheroidize, heat to below nonmagnetic, around 1300F should work, and either hold or repeat several times without ever going higher or losing magnetism. If the magnet lets go you will put carbon into solution and sort of go back to square one. If you have an oven with a rampable controller the softest and most complete spheroidization can be obtained by holding at around 1350F-1375F for an hour before cooling to under 900F no quicker than 50F/hour, but this will require a bit more soak time when it comes time to harden (the wider the carbon separation, the more time to put it back). The true advantage of the spheroidal anneal is the ability to move the carbon without affecting the grains so you can maintain whatever grain size you worked so hard to obtain, while the lamellar method must remake the grains and most often in a larger form.

When alloying gets combined with higher carbon levels, often the only way to fully anneal the steel is speroidization, O-1, L6 and perhaps 52100 are just a few examples of knifemaking steels where this would be the case.

Recommended reading on this topic: “Heat Treater’s Guide” by ASM


For information on processing of some of the most common simple steels used by knifemakers I also have these pages at my website:

http://www.cashenblades.com/heattreatment.html you will find a description of the various heat treating processes, but at the bottom of the page you will see a columnar list of common steels, clicking on those steels will give a page with all the compiled information on the various operations and temperatures along with charts and other information. I hope this is helpful to anybody who can use it.

If this post, and the resulting thread, has information that you feel is useful enough to be linked to in the sticky index at the top of the page you may indicate that by voting in the pole. If you feel the information, or resulting thread, is not helpful, productive, or positive enough for all visitors to benefit from, do feel free to indicate that with a “no” vote in the pole. Both opinions will be regarded with equal value in ensuring only the best information is highlighted in this forum. I have changed the rule regarding two pages to be considered for the sticky, and will participate with answering any questions to better see if the thread is of interest.
Last edited: Jun 13, 2012
D

I see that I cast the first vote. This is something that I didn't pick up from the texts that I have on metallurgy. Either I didn't read it, read but didn't remember it, or the authors considered it too advanced for basic texts to deal with how carbides behaved during annealing. Could well be the first case as I don't anneal.

I believe that annealing and spheroidizing are an important tool in the information and practices toolbox of anyone interested in working with blade and tool steels. This is a great starting point.

Even my antique brain was able to process that, Kevin, and I really thank you for posting it. It explained some things that I not only didn't know but had never thought of. The road to knowledge is always under construction.

That cleared up some things for me. Clearly explained. Thanks for the information

I would like to add a quick note of explanation on the images. I am sorry for the huge watermarks in the image. I honestly am not trying to advertise or over self promote with that. But I know of no other bladesmith that is doing their own metallography on this level and sharing it on the web, and thus I am rather protective of it. For many years I have thoroughly enjoyed sharing information that helps other makers on the internet and often I see pieces of it used by others elsewhere which is very flattering, but I have not always seen credit given for the source. For the most part I just understand that this goes with the territory, but the work I put in at the microscope is too dear to me not to protect it somehow. In sincerely hope you folks understand, and I am sorry for having to do it.
S

Kevin, as a professional photographer I am happy to see that you are watermarking your images, please do not apologize or feel guilty about that. It is your work and it makes just as much sense as stamping your blades.